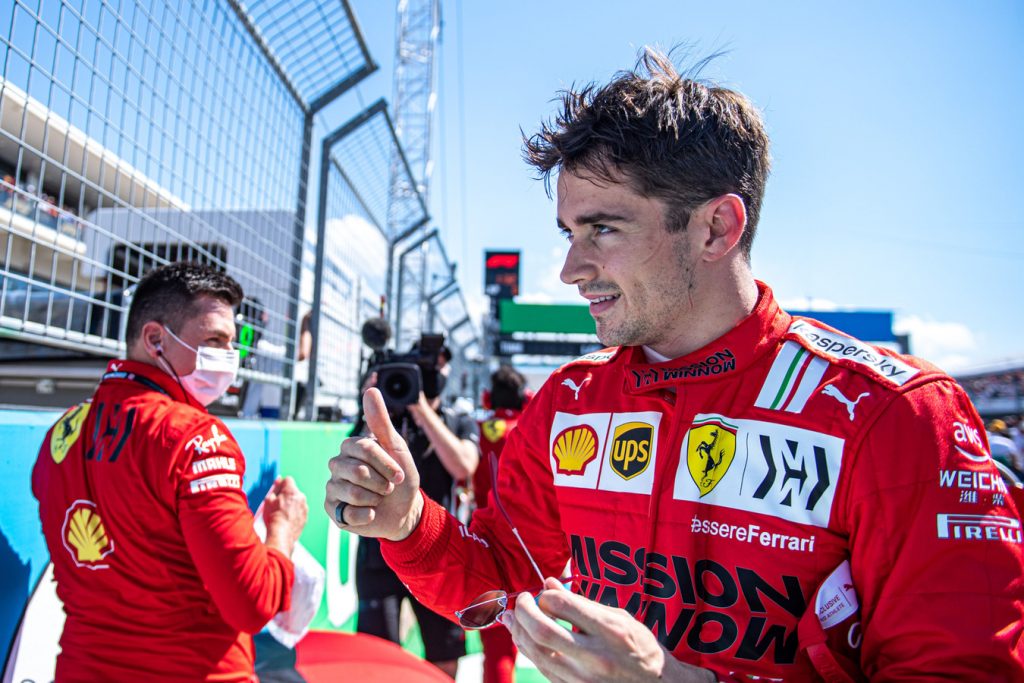 He is the first Monegasque driver to have won a Formula 1 Grand Prix, as well as the youngest driver in history to have won a Grand Prix at the wheel of a car from the Maranello team. His race number is 16. Born in Monaco, Leclerc was a childhood friend of Jules Bianchi and began racing karts on the Brignoles track, run by Bianchi’s father. Like Jules, Leclerc joined the ARM management company, headed by Nicolas Todt.

Leclerc began his karting career in 2005, winning the French PACA championship in the same year, in 2006 and in 2008. In 2009 he became the French cadet champion, before moving to the KF3 class in 2010, where he won the Junior Monaco Kart Cup. He continued to race in KF3 in 2011, the year in which he won the CIK-FIA KF3 world cup, the CIK-FIA Academy trophy and the ERDF Junior Kart Masters. Over the years Leclerc has also become a member of Todt’s ARM company.

Leclerc moved to the KF2 category in 2012 with the ART Grand Prix and won the WSK Euro Series title, as well as finishing in 2nd place in the CIK-FIA KF2 European Championship and in the CIK-FIA Under Karting World Championship. 18.

2013 was the last year in which Leclerc raced in the world of karting. He obtained a 6th place in the CIK-FIA KZ1 European Championship and a 2nd place in the CIK-FIA KZ World Championship, behind the current Red Bull Formula 1 driver, Max Verstappen. In 2014 Leclerc switched to single-seaters, racing in Formula Renault 2.0 Alps for the British team Fortec Motorsports. During the season he achieved seven podiums, including two victories, one of which in Monza, while the other came in the final round in Jerez, where he preceded the Russian Matevos Isaakyan. He finished the championship in 2nd place behind Nyck de Vries on Koiranen. Leclerc took part in European Formula 3 in 2015, driving a car of the Dutch team Van Amersfoort Racing. In the first event of the season, in Silverstone, Leclerc obtained pole position in race-2 and race-3, after the original poleman, Felix Rosenqvist, was excluded for technical reasons. He won his first race on the same weekend, in race-3, ahead of Antonio Giovinazzi and Jake Dennis. The second victory came in the following race weekend at Hockenheim, again in race-3, while in the other two races he obtained two podiums and three victories among rookies. Leclerc won for the third time in race-1 in Spa-Francorchamps, which allowed him to take the lead in the championship. In any case, Leclerc finished the season in 4th place, mainly due to the damage to the chassis he suffered following an accident with Lance Stroll in Zandvoort.

In November 2015, Leclerc finished the Macau Grand Prix in 2nd place and in December 2015 Leclerc took part in the post-season GP3 tests with ART Grand Prix and Arden International. In February 2016 Nyck de Vries confirmed that Leclerc would race in the 2016 GP3 season and the ART Grand Prix signed him the following week.

Leclerc immediately won the first race at the Circuit of Catalonia and repeated himself by winning the races in Austria and Belgium. On November 26, after Race 1 of the Abu Dhabi Grand Prix, he was crowned GP3 champion despite his retirement during the race. The week following his GP3 title victory, it was confirmed that Leclerc would step up to Formula 2 for the 2017 season with the Prema Racing team, together with his teammate Antonio Fuoco, also part of the Ferrari Driver Academy.

Leclerc dominated the first part of the season with 5 wins and 7 podiums in the first 12 races. In the first 7 rounds of Formula 2 he obtained all 7 pole positions, but the last one was removed from him due to a disqualification due to an irregularity of an element of the differential on his car and was assigned to the pilot Oliver Rowland at the helm of the DAMS.

In the round of Spa-Francorchamps he obtained pole number 7 under a storm of water and dominated the entire feature race with a 36-second advantage over runner-up Oliver Rowland. However, both will be disqualified by the race direction due to an irregularity at the bottom of the cars. In the sprint race, forced to start from the bottom, the Monegasque driver made a comeback up to fifth place. In Monza things weren’t going in the right way. He qualified only seventh in the feature race and, while fighting for first position with Nyck De Vries, the two collided (De Vries will be penalized at the end of the race) and lost control of their cars. Leclerc will finish the race in 17th position. In the sprint race Charles was still forced to recover from the bottom, managing to climb up to ninth position. At the weekend of the Jerez Grand Prix, Charles obtained pole number 8, breaking the record for the highest number of poles in the category held by Stoffel Vandoorne. In Race 1 Leclerc had a good start and maintained the leadership of the race. In the final stages the Safety car entered the track due to a contact between Matsushita and Ferrucci, this allowed Oliver Rowland to return to the Monegasque’s exhausts and try to keep the championship open; in fact, for Leclerc it was enough to finish in the points ahead of Rowland to mathematically win the Formula 2 title. Leclerc resisted the attacks of the DAMS driver and took the title home with 3 races to spare. In race 2 he started 8th, due to the high degradation of the tires he and his teammate Antonio Fuoco were forced to enter the pits, Leclerc managed to recover up to the 4th position but again due to the high degradation, in the last lap, he was overtaken first by Luca Ghiotto and then by his team-mate only to be mocked at the finish line by Nyck De Vries. The race ended in 7th position. In the next race, in Abu Dhabi, he only qualified sixth, finishing the race in second position after the disqualification of Oliver Rowland and Antonio Fuoco. In race 2 he started seventh. After a great comeback crowned by a masterful overtaking on the last lap, he won his seventh race of the season equaling Stoffel Vandoorne’s record of victories in one season.

He concluded the championship in first position with 282 points. On 29 November he participated in the second day of testing in the Abu Dhabi circuit aboard the single-seater of the Swiss team to obtain data on the Pirelli compounds that will be in use in the 2018 season. On 2 December of the same year he was made official as one of the two drivers of the team Sauber for the 2018 F1 Championship, alongside Marcus Ericsson who was reconfirmed.

In the first race of the season he obtained a 18th place in qualifying and a 13th in the race, 20 seconds from the points. After some difficult race weekends, in which he failed to shine particularly, in the 2018 Azerbaijani Grand Prix he won his first points thanks to a brilliant sixth place, which earned him 8 points in the championship. He concluded the season 13th with 39 points and will be voted F1 Rookie of the Year at the end of the year. On 11 September 2018, Scuderia Ferrari announced that the Monegasque driver, starting from the following season, would replace Kimi Räikkönen, alongside Sebastian Vettel. Leclerc took to the track for the first time with his new car, the SF90, on the second day of the pre-season tests in Barcelona, ​​setting the first time in the daily standings. In the first race of the season, in Australia, he finished in fifth place. In the following race, Bahrain, he became the second youngest driver in the history of Formula 1, after his box mate Vettel, to conquer a pole position, at the age of 21 and 165 days; the day after he also took his first podium and fastest lap in Formula 1, finishing in third place a race that the Monegasque led for the most part, only to give the two highest steps to Lewis Hamilton and Valtteri Bottas due to a problem to the engine.

In Belgium he obtained pole position and, above all, his first victory in Formula 1, the absolute first for a Monegasque in the circus as well as the first of the season for Ferrari; with this affirmation, at the age of 21 and 10 months he became the youngest rider to win a Grand Prix with the Cavallino, beating Jacky Ickx’s previous record after 51 years. The following week , in Italy, he still recorded pole and victory, bringing Ferrari back to triumph at Monza 9 years after Fernando Alonso’s previous success. He also won the pole start in the next two Grand Prix in Singapore and Russia, both of which ended on the podium. Postponed to the summer due to the COVID-19 pandemic, Leclerc’s season opened with a second place at the Austrian Grand Prix, achieved thanks to a five-second penalty imposed on Lewis Hamilton and a series of overtakes at the end of race. In fact, two disappointing performances followed, respectively at the Styrian Grand Prix (in which the Monegasque driver was forced to retire after a collision with his teammate Vettel) and that of Hungary (in which Leclerc finished the eleventh race, outside the area points). In fact, Leclerc’s season was bad for the car that was not fast. On the Mugello circuit, Charles and Vettel drove a SF1000 in a different red on the occasion of Ferrari’s 1000 F1 grand prix. But not even this livery improved the situation. Charles’s two podiums in 2020 were in Austria and Silverstone. In 2021 the SF21 was superior to the SF1000 but not in terms of victory. Leclerc found himself as comrade Carlos Sainz. Although the car was not very good Charles won two pole positions, in Monaco and Baku, and a podium, in Silverstone. But the Monegasque driver’s 2021 was characterized by a lot of bad luck. He closed the championship in seventh position behind his teammate Sainz and Lando Norris. In 2022 it is hoped that the car will be better and as Charles said if he has a good car he will fight every grand prix for the win.