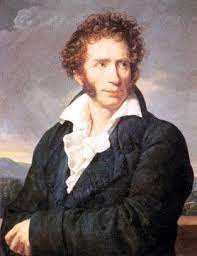 AT SCHOOL: TALKING ABOUT UGO FOSCOLO.

Eleonora, can you tell who wrote  these lines , please?

Eleonora: These lines are taken from The Sepulchres by Ugo Foscolo!

Teacher: that’s right, Eleonora. Can you tell me about his life?

Eleonora: I can say he was  an Italian poet, writer and translator, one of the leading writers of neoclassicism and pre-romanticism. He was one of the most notable Italian literary exponents of the period between the eighteenth and nineteenth centuries.

Teacher: that’ good! Which currents appeared at the time he lived?

E.: the neoclassical and romantic currents appeared or began to appear in Italy, during the Napoleonic age and the first Restoration.
T.: He was forced to move from the Greek island Zante, his homeland , when he was a boy to Venice  where  he felt an exile for life, torn from a world of classical ideals in which he was born and raised, through his literary training and the bond with the land of his ancestors (despite a very strong bond with Italy that he considered his motherland).

E.: yes, his life was characterized by travels and escapes, due to political reasons (he served in the armed forces of the Napoleonic states, but in a very critical way, and he was an opponent of the Austrians, because of his proud character, his Italian feelings and his republican convictions).

E.: no, He wasn’t … he had no religious faith and was unable to find happiness in the love of a woman, always felt within himself a rage of passions.
Like many intellectuals of his time, however, he felt attracted to the splendid images of Hellas, a symbol of harmony and virtue.  Teacher, where is he buried?

T:  he is buried in the Basilica of Santa Croce in Florence, the Temple of the Italian Glories he sang in the Sepulchres. He died poor in London and  in 1871  his ashes were brought back to his homeland by decree of the Italian government.