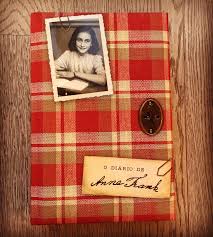 AN INTERVIEW WITH ANNE FRANK.

Journalist: Hello everyone!  what you are going to listen to will leave you breathless… because I have the pleasure of interviewing Anne Frank!   Hi Anne, first of all, I want to know about you.

Anne Frank: Hi, thank you for this interview.  I was born on June 12th, 1929; in my family there are four people: my father Otto, my mother Edith, my sister Margot and I.

Journalist: I know you are writing a diary; who gave it to you?

Anne Frank: oh, yes…. Here’s my diary! I chose it in a bookshop and my parents gave it to me for my thirteenth birthday.

Journalist:…What is your diary about?

Anne Frank: I write to  Ketty, my fictional friend, about my two years in the hiding place, in Amsterdam, during World War II; I also write about what happens in the house, about my thoughts, emotions and feelings as a teenager.

Journalist: Who was with you in the hiding place? Were you scared?

Anne Frank: I was with my family, the Van Pels family and Mr. Friz Pfeffer. We were eight people there. Yes, I was scared but I love my family and I love writing, so I spent my time with them.

Journalist: How did you spend your time?

Anne Frank: I talked to my friend Peter … we almost fell in love.

I spent my free time reading books and novels, listening to the radio, writing, trying not to get bored.

Journalist: Let’s talk about the Star of David, what does it really represent?

Anne Frank: The star of David is a six-pointed yellow star, and we, the Jews, had to wear it to distinguish ourselves from all the others. The Nazis considered us as an inferior race.

Journalist: Dear Anna, now let’s talk about what the ghettos were like.

Anne Frank: Ghettos were neighborhoods fenced off with barbed wire. There were ghettos that were inhabited for a few days, others instead for years. Most of them were destroyed by the Nazis; those who managed to survive were taken to concentration camps.

Journalist: Were you deported?

Anna Frank: “Yes, my sister Margot and I were deported to the Bergen-Belsen concentration camp, while my father and my mother were in Auschwitz. I remember that day very well, it was August 8th when they took us to the station; we got on the train, we were locked in the wagon; from the window we could admire the landscapes, observe the wheat fields and the sun shining … I could not take my eyes off the beauty that I had not seen for two years. And then…”. -“Concentration camps, nothing uglier to see… When winter came, it was very cold, there was almost nothing to eat and people began to die of hunger. We were forced to work outside, to sprinkle the ashes of dead people in the cultivated fields. I saw many people get sick and then die, I hoped not to get sick too and to return to normal life…!”

Anne Frank: I would like to become a writer, because I love writing and reading.

Journalist: Thank you. I hope your diary will be published as soon as possible and I think it will become a worldwide success! Good bye!

Anne Frank: thank you for this interview, don’t forget me, don’t forget that horrible war and read my diary, please! Think of all the beauty that is still around you and be happy!

Federica Pellegrini is an extraordinary swimmer. She was born in Mirano on August 5, 1988. It was her mother who started her swimming in 1995.

More and more often technology invades not only our daily routine, but also our mindset and our feelings. Usually, the youngsters are more sensitive  about

I cannot believe that! I’m having dinner with the richest duck in the world! Surely you all know the Disney comic and cartoon character, Scrooge

Bullying, unfortunately, is still very widespread today, which is why this has to be remedied. Unfortunately, every day we see more or less serious bullying