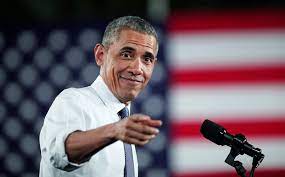 AN IMAGINARY INTERVIEW WITH BARACK OBAMA.

Reporter: Good evening Mr. Barack Obama, thank you for accepting my invitation for this interview.

Barack Obama: Thanks to you, it’s a real pleasure.

Barack Obama: I was born and grew up in Honolulu, my parents were still studying when I was a little boy and I remember in the evening I listened to my father reading those books and during the day I listened to my mother who did the same. At the age of 6 I started reading adventure books and I liked to illustrate the characters and stories I read in those books, my parents always gave me blank sheets and markers at every birthday, because they knew I liked them a lot. During my adolescence, I remember that at school there were many white boys who made fun of me for the black color of my skin and also of my other classmates, I realized that I wanted to become someone important to change bad things  in the world. I’ve studied a lot and I’ve   become a lawyer: my dream was  to know all the laws in order to defend poor people and the weakest people.

Journalist: what about your wife, Michelle, when and how did you meet  her?

Barack Obama: I met Michelle during my trip to Chicago,  we immediately understood that we had the same ideas, the same values ​​and after a year we got married , today we have a beautiful family.

Journalist: What memories do you have of the period in which you were President of the United States?

Barack Obama: These have been very important years, I have shown that a black man can be as good as white men because we are all the same. The first thing I did was to close a detention camp, I gave health insurance to those children who didn’t, I made human rights laws, I tried to make it clear that all human beings are equal without any distinction, I have visited several schools to make people understand the true values ​​of life and many other things. Journalist: Do you miss your post as President?

Barack Obama: No, because I have already been, now it is right that other people give their contribution. Journalist: What do you do now that you aren’t the president anymore?

Barack Obama: I do what all fathers do, I wake up in the morning I have breakfast with my familyl I go to work, I commit myself to society with different ideas and I always hope for a better future for all .

Reporter: Do you have any regrets?

Barack Obama: No, I don’t, because I have done everything I wanted in my life, always trying to be humble, having respect for everyone and everything.

Reporter: Do you want to say something to the new president of the United States Joe Biden and to the vice president Kamala Harris?

Barack Obama: I want to wish them good luck , but I’m sure they will succeed.

Reporter: Thank you, Mr. Barack Obama, it was a pleasure to meet you.