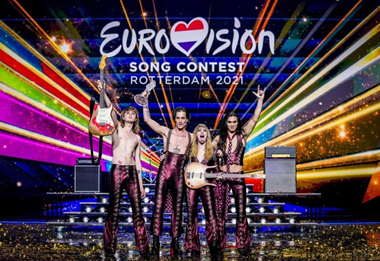 ALL CRAZY FOR MANESKIN.

The Maneskins win Eurovision 2021 by beating France: “We made history”

Even in Finland crazy about the Maneskin-

Beloved in Europe, the Eurovision Song Contest is one of the most followed musical events in the world, whose history is surprising.

The Eurovision Song Contest is a singing festival born in the 60s in Europe and still organized by the European Broadcasting Union. Those who are a few years older probably remember it as Eurovision or Eurofestival, names to which it is still sometimes called incorrectly.

Numerous European nations participate (in 2021 there are 39), belonging to the European Union or geographically part of the continent. Consisting of two elimination semifinals and a grand final, the singing contest annually proclaims a winner on live television and streaming. Hosting the event each year is the nation that won the previous year.

The competition took place at the Rotterdam Ahoy, in the Netherlands from 18 to 22 May 2021, thanks to the victory of Duncan Laurence with Arcade in the previous edition.This is the fifth edition of Eurovision held in the Netherlands (after the editions of the 1958, 1970, 1976 and 1980).

On October 26, 2020, the final list of participating states in this edition was made official, which included 41. However, on March 5, 2021 Armenia announced its withdrawal from the competition, thus bringing the number to 40. Subsequently, the EBU confirmed the exclusion of Belarus from the competition, officially bringing the number of participants to 39.

The semifinals of Eurovision Song Contest 2021 have decided the 20 finalists of the 65th edition who participated in the Grand Final on Saturday 22 May, in addition to the five Big Five and the organizing country.

The first verdict came with the semifinal and the nations eliminated were: Australia, Croatia, Ireland, North Macedonia, Romania, Slovenia.

Up to the final itself, where the participating countries were the following:

The Netherlands, Italy, France, Germany, the United Kingdom, and Spain.

Finally, here is the historic victory for the Måneskin, with their Shut up and good.

The young rock group, winner of the 2021 edition of the Sanremo Festival, brings home an exceptional result for Italy at the Eurovision Song Contest.

The line-up led by Damiano David is made up of Victoria De Angelis, Thomas Raggi and Ethan Torchio.