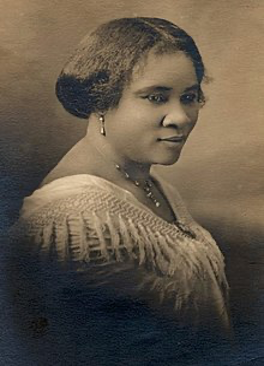 A few months ago, I was looking for a new TV series to watch on Netflix and then I suddenly bumped into a title that caught my attention: “Self- made”. I was intrigued by the plot and I decided to watch it immediately: it was amazing! When I found out that it was based on a true story, I started to do some researches.

She rose from nothing and, thanks to her inner strength and her resilience, she built her legacy granting a future for herself, her family and other women like her. In fact, she set an example for the others: she actively helped other people through donations and the creation of schools. She also offered jobs and education to women, defending their rights and the rights of black people like her.

But now let’s start from the beginning.

Sarah Breedlove was born in 1867 and became an orphan at the age of seven. When she was ten, she started working as a domestic servant and four years later she married a man to get away from the abuse of her brother-in-law. Later, she had one daughter, Lelia. In 1894, after the death of her first husband, she re-married, but in 1903 she left her second husband.

In 1906 she married C.J. Walker, a newspaper advertising salesman. Thanks to this marriage she became known as Madam C.J. Walker.

She found work as a laundress and, as many other black women, and she suffered from dandruff and baldness, mostly caused by poor diet, illness and infrequent bathing. She learned about hair care thanks to her brothers and later she started working as a commission agent selling products for Annie Malone.

At the time African American community was mostly ignored by beauty industries (and now we know that hair care for Afro hair requires a specific method). Sarah was disappointed with that and decided to develop her own product line, marketing herself as hairdresser and retailer of cosmetic creams. She worked hard, selling door to door and teaching other black women how to groom and style their hair. Her business increased and she was able to open a beauty parlour and established a college to train “hair culturists”.

Her figure is truly inspiring because, even if she had to face a lot of difficulties and challenges, she reached her goal. Sarah fought against the odds, against a system and a society and, eventually, won. But the most important thing is that she didn’t stand up only for herself: through her actions she gave a voice and a chance to other black women. She wasn’t worried only by her employee’s education as sales agent or hairdresser because what mattered the most was their value as women, as people who are strong, independent and educated. I think that people, and women in particular, must take a cue from her determination and resilience.

The greatest lesson I’ve learned from her is that no matter the obstacles we find on our way, we must follow our ideals and our intuitions. Madam C.J. Walker made me reflect a lot and I hope that other people will be inspired by her.