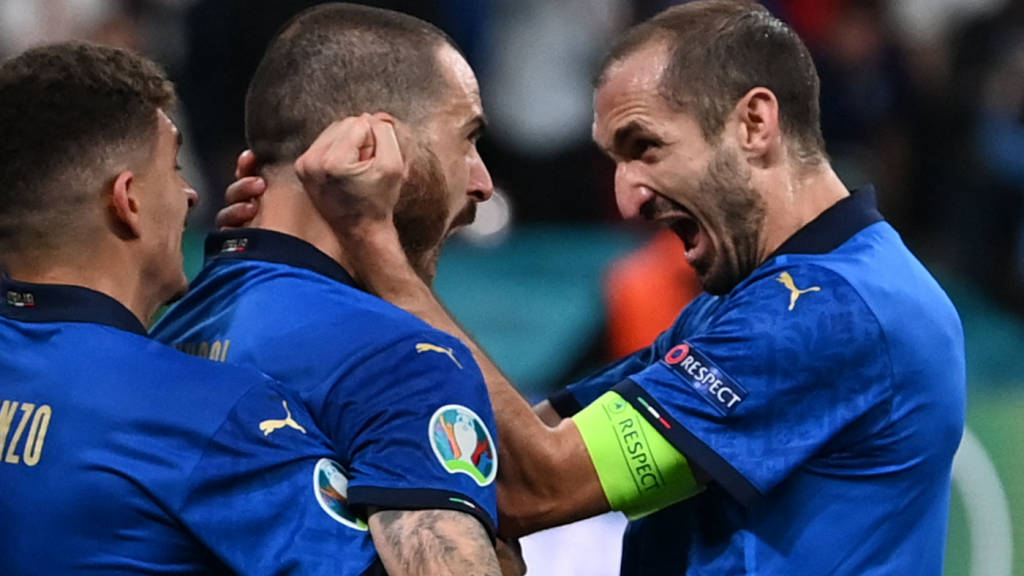 The European Championship is a tournament played every four years by 24 national football teams after a qualifying phase.

At Euro 2020, Italy was an underdog compared to France and Belgium, the best teams. It was an Italy that came from a failure to qualify for the World Cup in Russia, in 2018, and this hadn’t happened for 60 years, since 1957.

Italy started European Championship in a group of not very strong teams: Switzerland , Turkey and Wales. The first match of the tournament was Italy-Turkey: the first half ended 0-0 with a handball in the penalty area by Calik at the last minute, but the referee did not give a penalty kick. The second half was really easy for Italy that scored 3 goals thanks to the own goal of Demiral, and the goals of Immobile and Lorenzo Insigne. The final score was 3-0 and everybody thought Italy was a great team but it was not yet time to draw conclusions.

Italy vs Switzerland ended 3-0 too, with a brace scored by Locatelli and the goal scored by the striker Ciro Immobile.

After this match everything seemed easy for Italy, but the two World Champions, the goalkeeper Fabien Barthez and the midfielder Patrick Viera, said that Italy had played with weak teams.

The match Italy vs Wales was decisive for the first place in the group. Mancini changed some players, Matteo Pessina scored a goal and the final score was 1-0. Thanks to this victory Italy broke a record because it was the first team in a European to win all group matches without conceding a goal.

Italy vs Austria was the following challenge. At the end of the match the result was 0-0, but in extra-time Mancini changed some players and the goals were scored by the reserves Federico Chiesa and Pessina. With Kalajdzic’s goal the final score was 2-1.

France was eliminated on penalties and Belgium was the rival of Italy in the quarter-finals. Insigne and Barella scored two goals but a penalty by Lukaku reopened the match. In the second half there was no goal and Italy won but Spinazzola’s injury forced our player to leave the pitch in tears and to sit out Italy’s EURO 2020 final.

The semi-final vs Spain was a wonderful match characterized by respect and fair play. Federico Chiesa scored 1 goal in the 60th minute, but 20 minutes later Morata scored a well-deserved 1-1-goal. On penalties Dani Olmo and Locatelli failed their penalty kicks. The second and third penalties were scored by both teams. Then Bernardeschi scored a goal but Morata failed. It was the turn of Jorginho who, thanks to Unai Simon who missed the penalty, sent Italy to the final. All our players jumped on to the Italian/Brazilian midfielder.

In the final match Italy vs England, English were sure to win. After 2 minutes Luke Shaw scored a goal and a goal was scored by Bonucci. Nothing happened in extra time and once again penalties decided the winner. After the second penalty the score was 2-1 for England. Rashford hit a post and Bonucci scored a goal. Donnarumma denied Jadon Sancho. Bernardeschi scored for Italy and the score was 3-2 for the Italian team. Jorginho failed his penalty but Bukayo Saka saw the giant Italy goalkeeper save his spot -kick. The Azzurri won the final and became European Champions for the second time since 1968. Chiellini raised the cup.