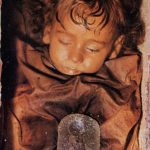 If you want to see something creepy and spooky in Sicily you should go in Palermo to visit Cappuccini church catacombs where there are dead bodies and skeleton, but one of the most creepy is the mummified little body of Rosalia Lombardo. The child, was born in 1918 and died two years later due to pneumonia, the disperate father that doesn’t accept the death of her daughter, turned to Dr. Salafia to mummified the child’s body and preserve it over time.
The methods of the doctor, similar to the ancient Egyptians, allowed a good conservation status of the child’s body, found out almost intact for about 90 years. The best part of this story is that the cameras filmed the baby that opened and closed her eyes.
Call her miracle, paranormal phenomenon, scientific phenomenon or other but this is the most interesting creepy thing that I heard about in my country.
At the end of the pandemic emergency I will go to visit all the catacombs because I’m curios and interested about it.