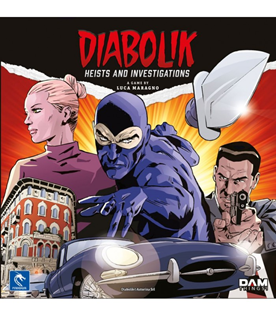 A COMIC WITH A THOUSAND STORIES.

“The secret of the fortress”, a reprint of Diabolik’s book of the same name, released in 2007, has recently appeared on newsstands.

A register that at the time made a lot of talk about itself, because for the first time in the history of comics a delicate topic was addressed: that of homosexuality.

Still defined as a “social problem”, understood as a world of violence and obstruction to the detriment of a certain category of people, this theme was introduced by a specific article that explained the intentions of the editorial staff and the will of the Giussani sisters, creators of Diabolik.

Diabolik: a popular series, faithful and equal to itself, with precise rules.

To be directly involved is a character that the most loyal readers already know, because he had had to do with Diabolik and Eva already other times in the past.

On the one hand, the applause for having addressed such a delicate subject, finally in an Italian popular comic; on the other hand, the criticism that aimed to attack certain aspects of the story (Eva pretends to be a young homosexual: certainly this is not the first time she disguises herself as a man – and on one occasion Diabolik also disguises herself as a woman)

Moreover, The secret of the fortress is a more unique than rare case of a book that contains a more colorful language than the elegant and winning standard diaboliki

Homophobia is not the only social issue that Diabolik has dealt with: with a sensitivity that reached its peak in the 90s and 2000s, the Astorina newspaper had touched on several dramatic themes.

Being a comic that talks about crime, thefts and murders, it goes without saying that many times stories with these implications are faced.

Needless to say, one of the recurring themes is that of the death penalty: as you know, Diabolik is formally sentenced to the guillotine (the sentence was issued in the third register, March 1963), and although the nation where he lives (Clerville) has abolished the death penalty , for the criminal it was decided to make an exception ..

Often the social issues dealt with in the comic have developed a parallel awareness campaign.

In addition to these, Diabolik and Eva have been testimonials of important messages, from those against reckless driving or in conditions of lack of clarity, to those on the abandonment of animals.