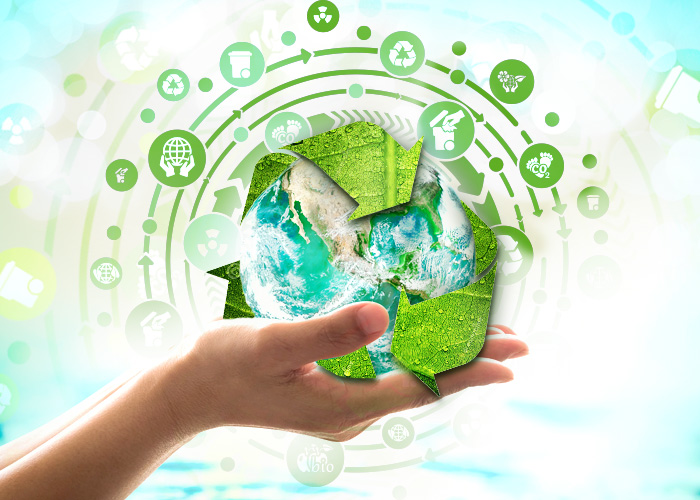 Every year 1,462 million tons of industrial waste are produced worldwide, to which are added household waste: about one kilo per day per inhabitant in industrialized countries, half a kilo or less in developing countries.
Until a few years ago the industries were the object of a dangerous transport that crossed international borders. Thus the toxic materials ended up in the poorest countries, which rarely have the technical facilities suitable for disposal. The privileged victim of anthropogenic activities are – and were – rivers.

THE IMPORTANCE OF RECYCLING. There was already an awareness of the importance of recycling, especially of some materials such as aluminum, paper, glass. The danger of microplastics was eventually pointed out, on which at the time there was much less attention than there is today. In fact, speaking of polystyrene, if it is left in the ground it does not degrade, but over time it can stiffen and then break up into tiny and therefore less visible particles.
On the other hand, in the recent past, there were no compostable bags like those used today, and therefore a specific sheet was dedicated to Pet bags, which can take centuries to degrade. Another object that has now become obsolete: the polyethylene telephone card (then used for telephone credit, in lire), which could contaminate the environment for millennia. Fortunately, the telephone cards of that time survive today especially in the collections of collectors.

POST COLD WAR. Above all, compared to today, the historical, social and political context was different. At the time, the difference between the “Eastern countries” (Europe) and those of Western Europe was topical, so much that there was still talk of a “former East Germany” and a “West Germany”. The convention entered into force in Italy on May
8, 1994. Today Italy is the best in Europe for its ability to recycle and valorise waste: 79% of waste produced against 56% in France, 50% in the United Kingdom and 43% in Germany. The world is drowning in the waste it produces. This can be understood from the simple comparison between the data on waste that were provided in 1993 and the current
ones. If in Italy in 1993 a total of 94 million tons of material were calculated that 80% ended up in landfills and only 20% was recycled or recovered, today the volume is double compared to then: about 188 million tons of waste, of which 156 “special”, deriving from industry and economic activities, and 32 generated by citizens with their domestic waste.

MANDATORY DECLARATIONS. National sector data are available on the Ispra website, the Higher Institute for Environmental Protection and Research, which maintains and publishes the national waste cadastre and provides a detailed set of indicators. Every year, the declarations are collected that all Italian waste producers, public bodies and
companies are obliged to draw up. The result is that today the collection of each municipality is precisely known and how it is divided between selection and recovery centers, waste-to-energy plants, composting or landfills. Other significant information is that each Italian produces an average of 308.47 kg of waste in a year, against the more than 800 kg of Americans and Danes, the most “wasteful” peoples. In Italy, some people take care of collecting packaging in plastic, aluminum, steel, paper and cardboard, wood, glass, or other waste products such as mineral or food oils and batteries. They are joined by associations, consortia or companies that manage the collection of special waste, such as tires or electronic equipment. With this mechanism, our country has managed to feed an efficient waste economy. The recycling, reuse and repair activities also generate 1.9 billion euros in investments and employ 519 thousand workers.

ITALIAN TECHNOLOGIES. Researchers have patented a thermochemical process to obtain methane and hydrogen from waste, with the contribution of heat from renewable sources. Also in this case the carbon dioxide produced is recovered and reused. The “green” hydrogen thus obtained can be used to supply clean energy to industries or means of transport. Example: the Italian Institute of Technology has been working for years on systems to produce biodegradable rubbers and plastics from food waste, as has Novamont, which has created Mater-bi, biodegradable plastic made from urban waste and from farm processing. Many industrial processes obtain also high quality rubbers and plastics from processing scraps or waste, such as tires or PET water bottles.
Tomorrow the waste disposal process will be much more efficient, thanks also to artificial intelligence and robots.
In all likelihood, these three ingredients will transform, in the near future, the way in which the problem of waste is tackled. Not only. Gps sensors will make it possible to identify the position of vehicles at any time to optimize their route and reduce traffic obstructions.
In waste treatment centers, sensorized robotic arms will be able, even better than what is already done now, to separate waste in an extremely precise way, for example also recognizing various types of plastic, rubber or glass, to allow reuse more effective. Another example is the creation of marketplaces, similar to those with which we sell used clothes today. In conclusion, the waste sector will also increasingly benefit from digital technologies that are transforming our lives in every area of activity.