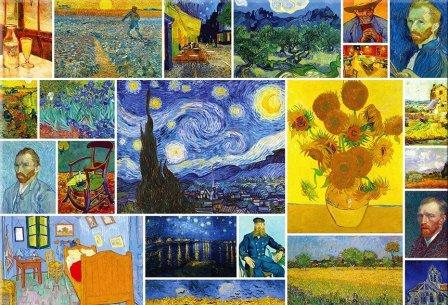 Hi! Today I’d like to talk about Vincent Van Gogh and the beauty of his masterpieces.

He was a self-taught post-Impressionist artist with strong trends toward the Expressionism.

He was born in 1853 in Zundert, in The Netherlands.

He was introverted and schizophrenic.

He started to paint when he was 27 years old and he went on until his death, at 37.

He painted about 900 paintings.

More than 200 paintings are in the Van Gogh Museum of Amsterdam.

In the first period of his life, he used dark colours for his paintings, but later he began to use brighter colours.

In his paintings there are many contrasts of colours: he used to create a sort of mixture between hot and cold tonalities.

An example of this technique can be seen in the Field of wheat with fly of crows, considered as his spiritual testament.

This painting was painted just before his death.

Many people believe that he shooted himself in the abdomen. Recent studies say that none of the reports of his death mention the word “suicide”, but only that he had “wounded himself”.

Why did the suicide version spread all over? Probably, the history of his nervous breakdowns and the alcoholism contributed to it.

1- He painted the Starry Night from a window of “Saint Paul de Mausole” hospital, in which he was hospitalized. This painting was considered a failure by him!

2- He used to paint himself because he couldn’t pay the models.

3- He used to paint on his finished paintings because he didn’t have money to buy new canvasses.

4- Many people say that Vincent only sold one painting.

5- In 1971, the singer Don McLean wrote a successful song dedicated to Vincent van Gogh. This song is called “Vincent”. The song is inspired by the only world of van Gogh and his paintings.

I think that the society of 19th century didn’t appreciate the skills and the sensitivity of Van Gogh. But, only after 100 years, people started to appreciate his soul, through his masterpieces.