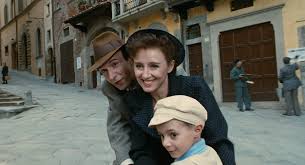 Hitler supported the superiority of the European people, the so-called Aryan race, over all the other people of the world. He believed in the existence of dominant superior races and inferior races destined to be submissive. In his distorted conception, the Jews were the origins of evil and, therefore, were to be eliminated. That’s how it began, starting from the second half of the twentieth century, the genocide, from the name Holocaust, which were responsible for theNazi Germany’s authority and their allies towards the Jews of Europe. Whole families uprooted and

deported to concentration camps: prisoners subjected to forced labour and subsequently killed and charred. Yes, charred: just like they were “old stuff,” something to annihilate to avoid infection. Here’s what the Nazis thought ofthe Jews. It is heartbreaking to try to imagine the hatred inflicted on these men, children, elders. Believing that man can come to such wickedness and that he caninflict on one of his brothers (another man) such a cruel condemnation, I feel a feeling of shame to belong to the same category: the human category. Imaging , for a moment, how many are the victims of such bestiality, causes me as much anger as hope: hope in man, so that similar events will be repeated ,never, in the future .

Many were the films that represented such ferocity, but today I would like talk about a film in particular which is titled, “Life is beautiful“.

In my opinion it’s a perfect symbiosis of irony and cruelty, reality and illusion, love and terror. It’s the story of a man from Tuscany named Guido (acted by Roberto Benigni), who moved with a dear friend, to Arezzo, with the intent of opening a library. Here he’s hosted by his uncle, who helps him getting employed  as waiter at the hotel where he works too.  The casual encounter with a young teacher, Dora, unleashes true love in him. Even though the woman isbetrothed to an old schoolmate, she isn’t however satisfied, because she sees, with the advent of the racial laws, a change of character in her  future husband. Conquered by the usual attentions given to her by Guido, she decides to run away with him. This is the beginning of their marriage, from which the little Giosuè is born. We are in 1944, a year characterized by the Nazi occupation, but there is still an air of happiness in their family. Guido manages to open his own library. Everything starts to change , when just on Giosuè’s birthday, the latter and the father are captured by the Nazis and deported to a camp. When Dora discovers the event, despite not having Jewish origins, decides voluntarily to follow their family in the lager, in order to rejoin them. In the concentration camp life is very hard and right away, to protect his son and keep him away from the crimes committed, Guido makes the child believe that it is all a game with points, that it was necessary to hide in order not to be found by the men in uniform and that , the  trip they made, was nothing more than a present for his birthday. He convinces his son to resist, despite hunger, telling him that the future winner of the game, passing tests, would won a tank. The game continues, until one day, Guido is taken  and shot by the Nazis… but the son is still “playing hide-and-seek”. Once he got out of his hiding place, his father was not there but his promise was kept, and when he saw an army tank coming, he considered himself the real winner: the war was over and the Russian forces freed the lagers. On the way to Liberation Giosuè

rejoins with his  mother exhorting with a “we have won!”. It is indeed true: Giosuè had won as well as the peace brought by the allied forces won over the brutality of German forces. In my opinion, it’s really exciting what emerges from this film: the love of a wife and mother who, knowing what she was going to encounter, decides to follow the family ; the strength of a father who manages to snatch the last smilefrom his son before he was brutally executed and his audacity in creating, for the little Giosuè, a parallel reality in which the inhumanity of Nazi executions and actions replaced humanity with a simple “game”. Guido gives his son a small glimmer of light in a dark moment, a hope in a time without it. The same hope should be maintained by us: young people of today, and men of the future. Hoping, more and more, that brutal actions such as those made in the past, may be annihilated. We should be aware of madness that led certain men to heinous behavior: being aware of the history, the brutality and above all the ignorance of many men who made such atrocities possible. It is necessary therefore:

“To Remember  NOT to forget……

To Remember  NOT to repeat”