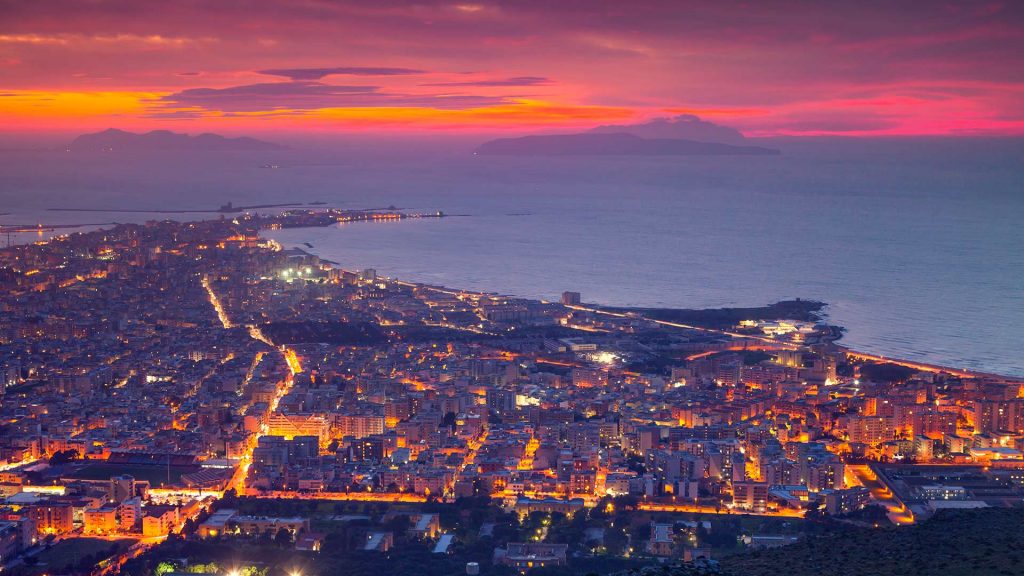 The light in Trapani is milky. The sun appears to cast a slight white haze over everything. The city is like a fork stretching out over the sea – the city on one prong, the salt pan on the other, the port in the middle, where there are still a certain number of sailing boats and schooners, now used for the trade of salt.

Trapani is located in the westernmost part of Sicily. It is also called the “city between two seas” as it extends over a narrow strip of land, surrounded by the sea. Over time Trapani has developed a flourishing economic activity, which is linked to the extraction and trade of salt. The city enjoys a Mediterranean climate, with warm winters and hot summers.

Trapani has always been the cultural center of the entire province and today it is home to various degree courses, art and music institutes. Moreover, this year, on 21 July 2021, it will host the largest folk festival in Europe, in which many dancers, singers and musicians will take part. Regarding the festival, the Tourism Councilor Rosalia D’Alì said: “This event is a great success for all of us. It will revamp Trapani in the scene of international events, which represent great tourism marketing opportunities for the entire territory “.

Trapani also boasts an old artistic heritage in the production of craft red coral objects. In fact, between the fifteenth and sixteenth century, many Jews and Genoese moved to Trapani, where a coral “mine” had been discovered, producing necklaces, earrings, bracelets and much more…

There are many tourist attractions in the city, but the main ones are: Trapani Cathedral, which is located in the historic centre and it is dedicated to San Lorenzo; the facade of the basilica is built in Baroque style and has a pronaos in the lower part, while the upper part is characterized by a curvilinear course. Another important place of interest is the Pepoli Regional Museum, which includes beautiful art works such as paintings, sculptures, jewels, sacred objects etc. Moreover, it is worth visiting the Trapani and Paceco Salt Pans, a nature reserve where the extraction of sea salt is carried out. Finally, not far from Trapani, near the little city Custonaci, there is the Mangiapane Cave, which is part of an ancient prehistoric settlement, where you can find rock paintings.

Trapani cuisine is based on the typical fish- and seafood specialties, such as the famous couscous, and the well-known “pesto alla trapanese”, also called “pasta cu l’agghia” by the inhabitants of the city. As for the restaurants, you can enjoy delicious food in the Osteria Vineria in Casa mia, where the specialties are home-made pasta with sardines and Sicilian wines, to taste in a room which overlooks the sea. There is also L’Osteria I Vitelloni, which offers Sicilian dishes based on fish, couscous and pistachio. Last but not least, La Bettolaccia  is also an excellent restaurant.

As concerns the stay, in the center of Trapani there is the elegant Hotel Central Gallery Rooms, located five minutes’ walk from the port; it offers modern colorful rooms, and is always excellent on cleanliness, service and hospitality.  Another great place is Trapani In, which offers modern and air-conditioned rooms too and it is located in the historic center of the city, opposite the pier from which the ferries to the Egadi Islands depart.

All this and much more you can enjoy in Trapani!