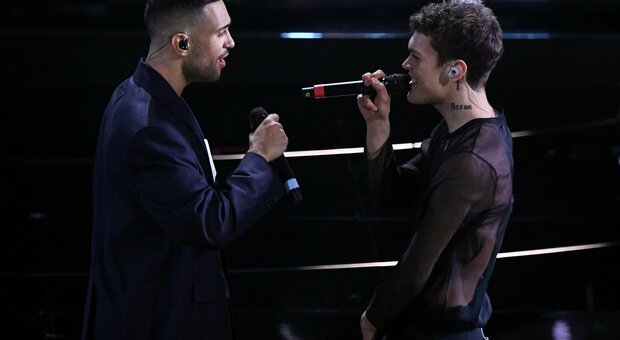 This year’s Sanremo Festival was the 72nd edition of the annual television singing competition. As always it took place inside the Ariston Theatre in Sanremo and was conducted for the third time by Amadeus, reaching about 76% of the audience. The Festival was broadcast by Rai from 1st to 5th February, and between the five consecutive evenings on Friday 4th February the special evening of the covers returned, during which the artists performed a song from the ’60s,’ 70s, ’80s or ’90s.

The Festival was won by the two young people Mahmood (who returns to the Ariston stage after winning the 2019 Festival with Soldi, a piece that also earned him the second place at Eurovision) and Blanco with the song “Brividi“, which is receiving great fame within our country, reaching over 12 and a half million reviews on Youtube, Spotify and others since the song will be at the Eurovision Song Contest in Italy.

The song is about the desire to communicate, to express oneself and, at the same time, the fear of feeling inadequate in love, of not being able to dare enough, passion mixed with insecurities, anxieties, torment. Often it is more comfortable to escape, to abandon everything in order not to be too involved, there is the prayer not to escape, not to be left and abandoned with shivers, between moments of love and passion, before a sudden abandonment. If the desire is to stay together, not to waste this opportunity, they seem to overcome difficulties in a relationship that lives between passion and escape from responsibilities and from those who get too close to our innermost soul. The song also celebrates love in all its forms, leaving no room for prejudice, gender or barriers of any kind. The two artists tell of a universal feeling, which they manage to convey despite their differences and the ten-year age difference. At the announcement of their names on the stage of the Ariston they were incredulous, without tears, but showing themselves to the public with spontaneous smiles. In an interview with Il Corriere della sera, they both tell about their emotions, how the song was born and also their friendship and how important the support of the family was in the months before the kermesse, which ended on Saturday 5th February. Immediately after the victory, Blanco ran into the audience to hug his parents saying that “It was a satisfaction, in a good way, to see them cry”. Mahmood’s family, on the other hand, was waiting for him at the hotel after the victory, as he tells on  Il Corriere della Sera: “My mom was in the room the other night, but yesterday she didn’t have a ticket. When I got back to the hotel we hugged and cried.”

Blanco and Mahmood met last summer in Michelangelo’s recording studio. From their vision of love, different but equally spontaneous, the text of Broglie was born, which was able to conquer the hearts of the public from the very first listen. “He was at the piano and from a wrong chord the refrain was born and each of us wrote the words of his part. Then months later we found ourselves with the stanzas, written independently. It was natural, spontaneous “, they both say, agreeing on the harmony that they managed to find right away and that they brought to the Ariston stage, climbing the rankings of the other Big names in the race. Maybe they will write other songs together!