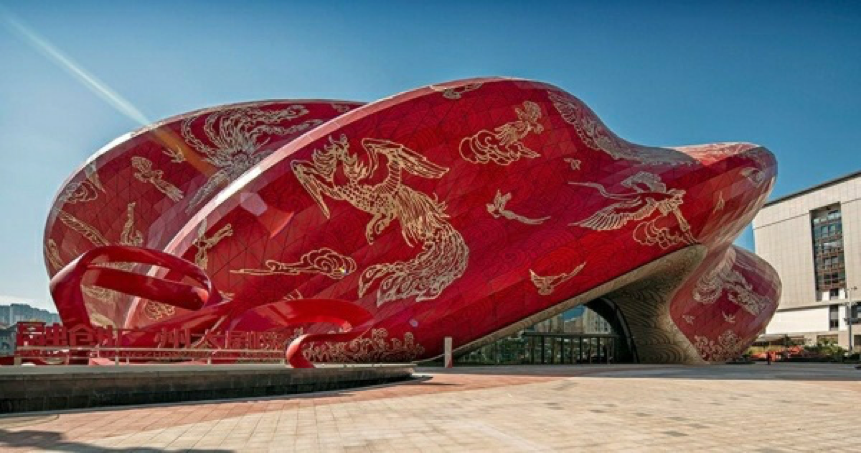 Silk has been the protagonist in Guangzhou for thousands of years, providing local artists with the material to make tapestries and ornamental garments of exceptional quality, where myths and scenes from nature were represented.  Now this tradition is revived on a large scale in the forms of the new city theater which can accommodate up to 2000 people. In fact, the architects of Steven Chilton Architects drew inspiration from the tradition of silk to create the new theater, which will open in 2021.

The whole building is a tribute to the art of silk.  To simulate the physicality of the fabric, the architects designed the external structure through a series of ten folds that delicately intertwine thus forming the external envelope.  With the same principle they designed the entrances, created by “tucking” the surface on itself.

The local myth of the “100 birds paying homage to the phoenix” was depicted on the outer covering.  The composition is inspired by Zhang Hongfei’s illustrations and consists of thousands of perforated aluminum panels, each painted with a unique portion of the overall decoration.  Using a compositional style inspired by the aesthetics of tattoo art, each part was positioned on the body of the theater in order to enhance the structure of the building: so the phoenix occupies the most prominent part of the exterior, while the birds were  placed in the spaces between.

Inside the space is a performance environment that can take on a variety of different configurations.  Ceiling-mounted LED screens provide an immersive experience.  The theater can become the setting for productions that require water effects.  Under the center of the theater stage floor is a deep pool with an automated lift that can be raised half a meter above the stage floor or dropped nine meters into the water.

All measures that make the Guangzhou theater an important cultural center, which the builders intend to train the leaders of the performing arts of tomorrow .