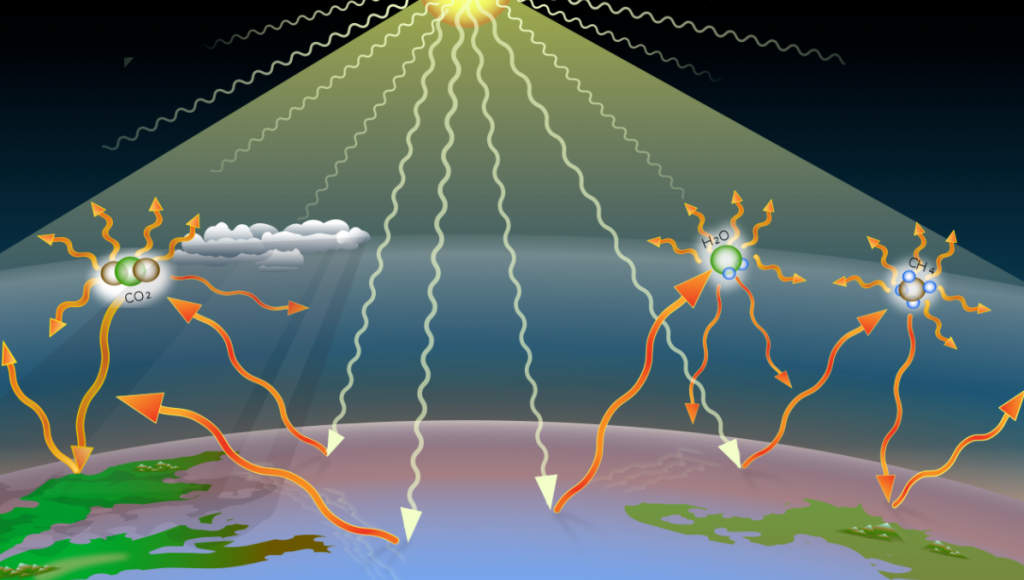 THE ROLE OF GREENHOUSE GASES IN THE CIMATE CHANGES.

We are killing the Earth. Every day, hour after hour, we emit harmful gases into the atmosphere that
do nothing but slowly destroy the delicate balance that belonged to our planet since its creation. To
cause all this are not only our comforts, but above all the big industries.
Scientists on this subject fall into two groups. The one thing all scientists agree on is that the earth’s
climate is changing. The temperature is inexorably rising, degree by degree, to levels that those who
are still alive have never known. What scientists are divided on is the reason for this increase in
temperature: some argue that it is a natural change that has occurred at other times in the history of
our planet, while according to most the weight of this natural change has increased many times from
pollution.

The greenhouse effect, if kept at normal values, allows life on earth: various gases present in the
atmosphere, called greenhouse gases, allow solar radiation to pass, while they absorb part of the
infrared rays emitted from the ground and re-emit them in all directions , therefore also towards the
planet. This allows the average temperature of the Earth to never go down to the freezing point of
water. The greenhouse effect is so called because it recalls what happens in a greenhouse, even if the
bases are different: the greenhouse gases behave as if they were the glass of the greenhouse.

Greenhouse gases also include carbon dioxide, which is emitted by factories and machines. Therefore,
if one thinks of the industrial development that has taken place in recent years, one can only vaguely
imagine how much more carbon dioxide we put in than the one already present. Furthermore,
deforestation must also be calculated, which affects because the trees no longer absorb carbon
dioxide.

There are new studies thanks to which a chilling fact has been demonstrated: the Arctic ice sheet,
which has always had the task of helping the planet to cool down, is melting at such rapid rates that,
if we do not act in time and in a decisively, within 35 years the ice could permanently disappear in
the summer months. Some climatologists argue that the average temperature over the next few years
will increase by a few degrees, and that by 2020 the arid zones of our planet will have moved several
kilometers north. But despite this evidence, some scientists disagree that this warming is man-made,
and accuse their colleagues of having only prejudices against economic development.

There are still many doubts about the climate changes that are taking place, and scholars are working
hard to better understand what is happening to our planet, and to make more and more precise
predictions about what will happen in the coming centuries. But on one thing I think that all scientists
and all living beings can not help but agree: pollution hurts. So why wait for the Earth to ask us to
change something that is harmful to us in the first place? Shouldn’t we demonstrate the maturity
acquired in millennia of development, and put a stop to it all? And also: All of us, and not just a few
people, shouldn’t we show some respect for this planet that has kindly given us everything to live?
These are questions that we should all ask ourselves, but especially those who have the power to
really change something: politicians. Because I don’t think the pollution that a car produces is the
same as that produced by an industry. So, even if we started to move only by public transport and to
put in place all those little tricks to pollute less, who will think about changing the rest?