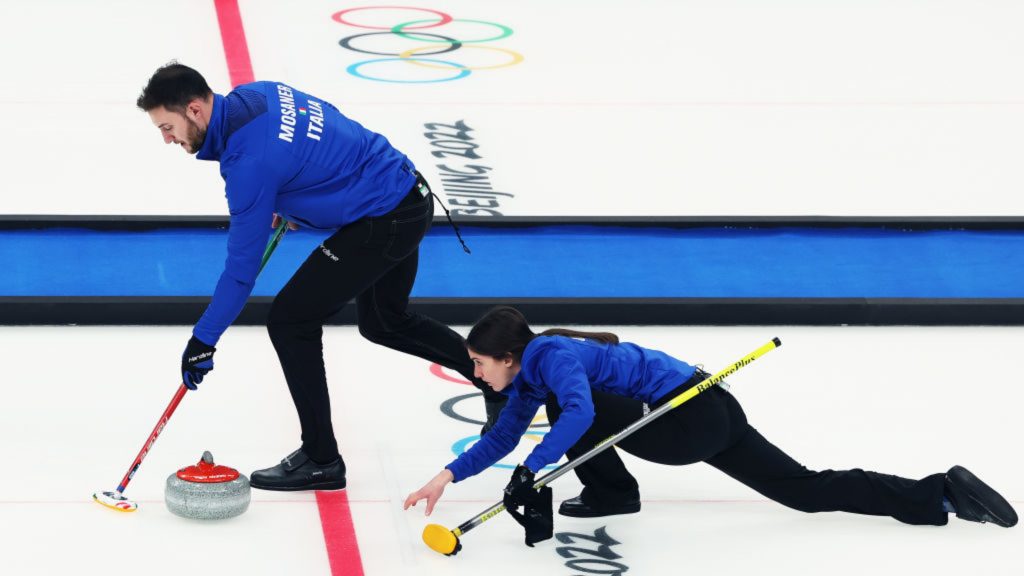 Both fell in love with curling at a very early age, Amos was five, Stefania was eight and from that moment it was only a crescendo.

Stefania Constantini, born in Pieve di Cadore (Veneto) on 15th April 1999, was approached to curling by a friend, Giulia.

“The moment I started playing curling, a spark ignited,” she said in an interview with the journal ‘Fra Noi’ . “I began to get more and more passionate, and slowly I began to let go of all other activities to be able to devote myself totally to this sport.”

Even though she spent long hours training, she also worked in a small shop in Cortina d’Ampezzo and it was not easy to reconcile her work with curling, but she never gave up and pursued her biggest dream of becoming an olympic athlete. In 2016 she participated in the Youth Olympic Games in Lillehammer and in 2017 she obtained the bronze medal with the women’s team at the European Championships in St. Gallen, Switzerland. Beijing 2022 represents his Olympic debut. She joined the sport section of the Italian police force Polizia di Stato called ‘Fiamme Oro’.

Amos Mosaner, born in Trento on 12th March 1995, essentially grew up with curling. His father was also a curler  and from the first time he saw his son playing, he understood that he was cut out for this sport.

Amos started to participate in several competitions, achieving five Absolute national titles, two bronzes at the European Championships in Tallinn (2018) and Lillehammer (2021). For him, this is the second Olympic participation after Pyeongchang 2018. From 2017 he joined the military air force, with its sport section, the ‘Fiamme Gialle’.

The team Mosaner-Constantini was formed in 2018 and from then, they created a really good complicity. Now, in Beijing, after all the nine matches won, there is the gold medal.

“After we finished round robin unbeaten, nine games and nine victories, we really looked at each other and said ‘this is the moment to change our goal’. At first we wanted to reach the semifinals but, given the great work we have done, it seemed fair to climb to the top and catch what we deserve and so we did” the 22-years-old commented to ‘Corriere dello Sport’.

Although according to forecasts they had not been considered candidates as possible winners, Amos and Stefania proved them wrong, creating an amazing duo, a perfect match.