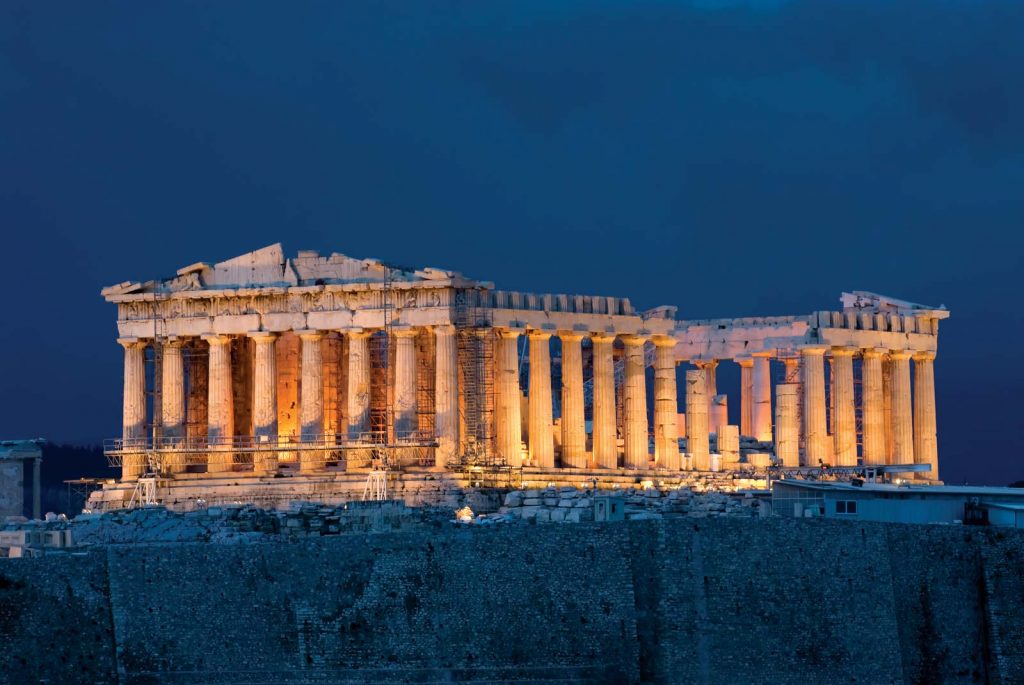 The Parthenon is one of the masterpieces that most symbolizes one of the most glorious periods in human history, the one experienced with Athens.

Parthenon in Greek means “room of the virgin”, and it was the Acropolis building that represented the greatness of Athens and classical art.

It was born on the remains of a previous temple razed to the ground by the Persians. The new one would proclaim the glory of Athens.

The hostilities between the Greeks and the Persians had been going on for decades.

With the rise to power of Pericles in 460 BC, relations with the Persians were governed by a peace that prevented the Persians from entering the Aegean.

Thanks to the leadership of Athens and Sparta, the golden age of Greece had begun.

The works began in 447 BC. and Pericles made use of the work of the major artists of the time, the sculptor Phidias, and the architects Ictino and Callicatre.

The Parthenon was the engineering and architectural masterpiece of antiquity: 31 meters wide and 70 long, the construction of the Parthenon required tons of marble. The stone came from the quarries of Mount Pentelico.

A special technique was required to transport the blocks to the top of the Acropolis: the hypothesis is that the builders resorted to a system of wooden frames positioned around the columns that were transported up the hill with oxen in the manner of a roller.

Cranes were used at the construction site with a system to lift the blocks through a winch at the base of the frame.

The blocks so large were joined with grappas inserted into special slots that would have kept them together even in the event of an earthquake.

The Parthenon was defined as the temple of sculpture, supervised by Phidias in every detail, and the two pediments, the remains of which are now in the British Museum, fully represent his art: on the western one, the dispute between Athena and Poseidon was represented and on the other, facing east, the birth of Athena.

The knowledge of perspectives is amazing, calculating every optical distortion and in perfect proportions for those who would have looked at it from below. Its external proportions corresponded to a similar internal harmony with splendid wooden sculptures and colored reliefs.

Many sculptures have been lost, others have been mutilated or ruined by the time, but despite these shortcomings we are faced with one of the greatest masterpieces of Classical Art.

In Greek art the male nude had the purpose of a hymn to perfection, a hymn to nature. We find in the Parthenon, for example, Dionysus, god of wine linked to the earth and fertility, represented the instinctive side of nature, something very human.

In the other corner of the pediment there is the Sculpture of 3 women, 3 goddesses (badly mutilated) Aphrodite (Venus) lying in the arms of her mother Dione, and Estia, goddess of purity and fertility. They were realized by Phidias, with the help of his pupils.

The horse’s head is also extraordinary, with outward eyes and dilated nostrils. It was part of the chariot that had dragged the Moon (the Goddess Selene) across the starry sky all night, and now at dawn the horses, the horse and the Goddess were diving back into the sea.

Also in the British Museum there is a frieze depicting an impressive procession that took place every 4 years in August, the famous great panathenaeums.

The Museum preserves 80 meters of this fantastic frieze, which makes us understand what we would have seen at that moment in the streets of Athens: chariots, riders, horses, boys carrying offerings. Inside the Parthenon there was a large statue of Athena, which was one of the largest statues ever built, entirely covered in gold and ivory.

Phidias, sculptor and architect of Pericles, was accused of having appropriated the gold destined for the statue, and accused him of impiety for having depicted himself and Pericles among the sacred characters of Athena’s shield. He was put in prison for theft of gold.

A cause of scandal at the time of its construction, the Parthenon and its riches are today a milestone in the history of art.