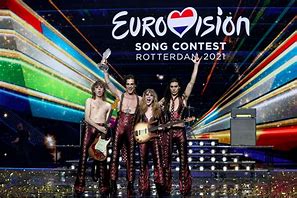 The Maneskin’s triumph at Eurovision 2021

Ernesto Assante in an article of “the Republic”, published in 2021, writes that the Maneskin are the third Italian artists to win the European competition after Gigliola Cinquetti in 1964 and Toto Cutugno in 1990. The award returns to Italy after 31 years. The Maneskins won the 2021 edition of the Eurovision Song Contest which took place in Rotterdam.

The journalist states that the artists’ victory is deserved and that according to him they are the “Next Gen Eu”, they embody it with their energy, their freedom, their passion and the song, “Shut up and good”, clear and rock , was arguably the best of the long Dutch musical evening. And they won everything there was to win in this 2021, the Sanremo festival a few weeks ago, the Eurovision Song Contest tonight.

The Maneskins bring Eurovision back to Italy after 31 years: they are the third Italian artists to win the European competition after Gigliola Cinquetti in 1964 and Toto Cutugno in 1990.

It was a fun evening, even if not “explosive” as in other editions: there were no particular surprises, the desire to “exaggerate” that has always characterized the European song show seemed a bit hidden in a show which in the post-Covid era, was decidedly more predictable, also in musical terms, oriented largely towards a standardized pop-dance and few have come out of the script. The final three, with Italy, Switzerland and France to compete for the final votes, was very tense and the victory of the band arrived, liberating to the applause of the whole audience.

Their name means moonshine in Danish and their passion for music brought them to X-Factor in 2017; the Maneskin reach the final, finishing in second place. A great turning point in their artistic path, however, is the victory at the Sanremo Festival 2021, thanks to which they access the Eurovision Song Contest.

“Silent and good”, the song with which Sanremo win, is not the classic Ariston song; yet those four grown-up boys who used to play in the streets of Rome, have something special. In Rotterdam, a few months later, it was an extraordinary success: Maneskin became the third Italian winners in the history of the event and the first rock group to triumph after 2006. It is appropriate to say: << Excuse me, but I believe so much that I can make this jump >>.

The song brought into the competition by the band undergoes changes compared to the winning version of the Sanremo Festival: according to the Eurovision Song Contest regulations, each song must last no more than three minutes and, above all, cannot contain profanity.

The party is partially ruined by the accusations of a French magazine about an alleged drug use by Damiano during the vote. At the press conference reserved for the winners, the singer denies it, explaining that guitarist Thomas unintentionally broke a glass and they tried to collect the broken glass fragments on their table.

Regarding the affair, the singer asked to undergo a drug test to prove his innocence. However, after an on-the-spot check, the pieces of glass under the table of the Italian delegation were confirmed.