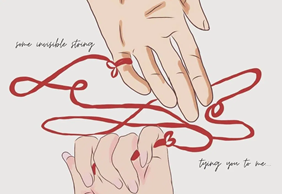 THE LEGEND OF THE RED THREAD.

The red thread of destiny is a popular legend of Chinese origin widespread in Japan. According to tradition, every person has, since birth, an invisible red thread tied to the little finger of his left hand that binds him to his soul mate. The wire also has the characteristic of being indestructible: the two people are destined, sooner or later, to meet and marry.

Don’t you  know the legend? No problem!

Wei was a man who, orphaned of both his parents at an early age, wished to marry and have a large family; despite his efforts, he had reached adulthood without finding a woman who wanted to become his wife. During a trip Wei met, on the steps of a temple, an old man leaning with his back to a sack who was consulting a book. Wei asked the man what he was reading; the elder replied that he was the God of marriage and, after looking at the book, told Wei that his wife was now a three-year-old girl and that he would have to wait another fourteen years before he met her.                 Wei, disappointed by the answer, asked what the sack contained; the man replied that there was a red wire inside that was used to tie the feet of husbands and wives. That thread is invisible and impossible to cut, so once two people are tied together, they will be destined to marry regardless of their behavior or the events they will live. These words did not convince Wei that, in order to feel free to choose the woman to marry, he ordered his servant to kill the child destined to become his wife. The servant stabbed the child but did not kill her: he only managed to hurt her head and Wei, after those events, continued his usual life in search of his wife.                                             Fourteen years later, Wei, still unmarried, met a beautiful 17-year-old girl from a wealthy family and married her. The girl always wore a rag on her forehead and Wei, after many years, asked her why she did not take off even to wash. The woman, in tears, said that when she was three years old, she was stabbed by a man and that a scar remained on her forehead; for shame she hid it with the cloth. In those words, Wei, remembering the encounter with the God of marriage and the order he gave to his servant, confided to the woman that he had tried to kill her. Once Wei and his wife knew the story, they loved each other more than before and lived happily ever after. So, the red thread represents an indestructible bond, stronger than everything and everyone, than any obstacle or adversity. A long thread that over time tends to intertwine, forcing the two souls to get lost and take different paths.    But all knots are bound to unravel sooner or later and the two souls will get closer and closer until they meet or find each other again. In fact, it is possible that their meeting has already taken place, but it simply wasn’t the right time yet.   All we have to do is wait for the fate of destiny!

It is difficult to think that a thread can mark our destiny at birth. but it seems to represent a bond stronger than anything and everyone, than any obstacle or adversity. There is something almost divine about this evocative legend.  Surely, like any self-respecting legend, it leaves the benefit of the doubt; you can read, reflect, smile, develop a personal idea and then let things go as they should, as a famous song says “Que sera, sera, whatever will be, will be”