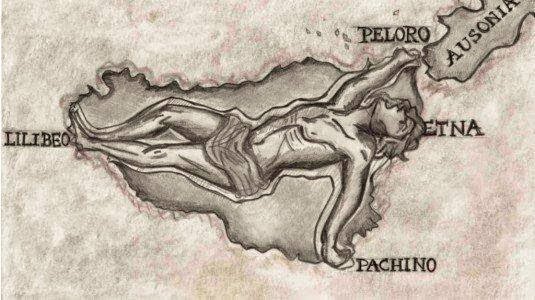 THE LEGEND OF ENCELADUS.

You must know that Etna has not always been a volcano; or at least, according to this legend.

The first eruption of Etna: the legend of Enceladus.

The protagonist of this legend, his name was Enceladus and he was the greatest of the giants. It is said that one day he decided to take the place of Jupiter to dominate the world. To achieve this, however, he had to reach heaven, where the gods dwelled. He decided, then, to build a very long staircase, made of mountains: he began to place them, one on top of the other, asking his brothers for help, to succeed in the enterprise in the shortest possible time.

His desire to conquer the world was really strong. The other giants agreed, mainly because they were younger and feared Enceladus, but basically did not support his idea. Everyone feared him because he had huge hands and when he was angry he was spitting flames from his mouth. The giants, therefore, driven by fear, took Mont Blanc, Monte Pindo from Greece, and the high mountains of Asia, resting them on top of the other. The sky, however, was still too far away.

They then began to take the African mountains as well and continued the work. Jupiter, meanwhile, watched without doing anything, waiting for the right moment to intervene. At one point, he couldn’t help but get terribly angry at Enceladus’ behavior, which was really too stubborn. He cast lightning on the giants, causing them to fall to the ground.

Another lightning bolt was thrown at the pile of mountains, which shattered into a thousand pieces. Enceladus was buried under Mount Etna, unable to move the mountain. He then began to throw flames from his chest, which reached the summit, accompanied by a loud roar.

The giant’s breath had melted the lava, which began to descend the slopes of the mountain, putting the inhabitants in danger. This was how the first eruption of Etna took place.