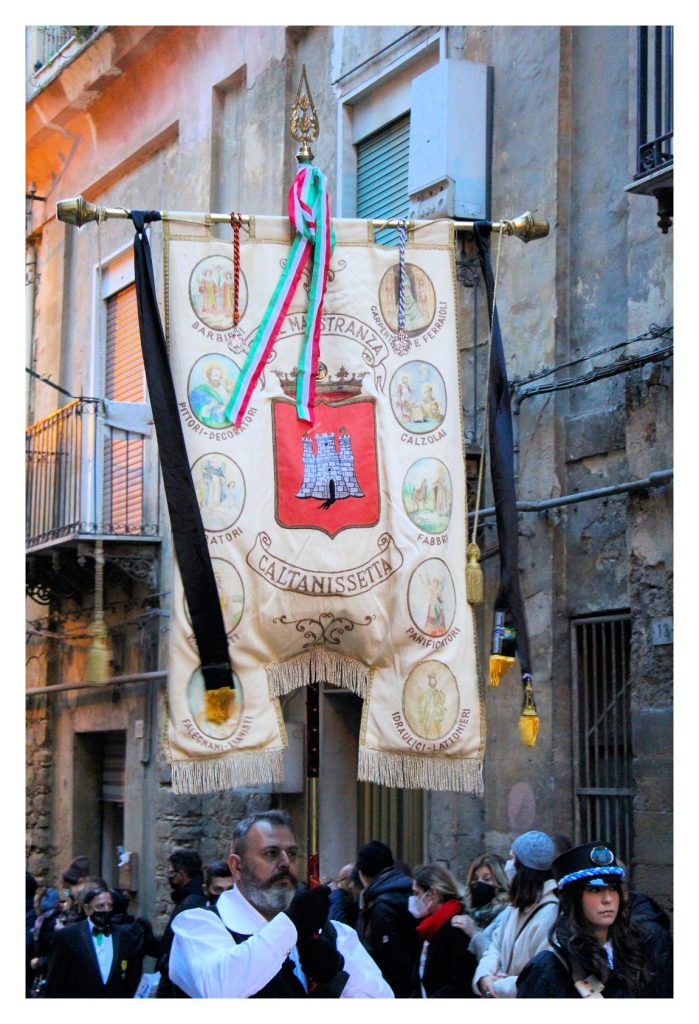 The Holy Week in Caltanissetta is the most important religious celebration and the most followed by citizens. Religious ceremonies take place between Palm Sunday and Easter Sunday and it consists of 8 different events: Jesus of Nazareth’s procession, the performances of The Last Supper and “Scinnenza”, the holy parade of the “Real Maestranza” on Wednesday, the procession of  the “Varicedde” and the “Vare”, respectively small size and live- size sculptures commemorating the Passion of Jesus Christ , the  mournful procession of the  Black Christ and the joyful one of the Resurrection.

The procession was commissioned by the Caltanissetta peasants who, excluded from the other Holy Week processions, hoped to play a leading role, at least on Palm Sunday.  In 1869, when the Baron Vincenzo Filia Granara pointed out that the statue was not in tune with the festive atmosphere of the Palms’ day, it was decided to bring the statue of the Blessed Christ on a throne made of flowers and over time it took the shape that can be still appreciated today.

The statue of the Blessed Christ is placed on a boat-shaped structure covered with so many wildflowers.  Before leaving the courtyard of the former Jesuit college in the late afternoon, the statue of Jesus of Nazareth is placed on the boat, dressed and surrounded by countless devotees.  Passing through the gates of the library, as if they were the gates of Jerusalem, the procession begins.  Throughout the trip, the procession is accompanied by many children with olive branches and intertwined palms, as well as by two local marching bands and all the members of the organizing brotherhood, divided into two groups, who wear distinctive clothes, holding “Bilannuna”, that is candles wrapped in cardboard with candle cover representing the simulacrum.

THE LAST DINNER, AND THE RESURRECTION SCINNENZA

These representations are made respectively on Monday, Holy Tuesday and Easter Sunday and they are divided into three acts.  The Last Supper, performed on Monday starts with Jesus Christ and his disciples who arrive in Jerusalem, where he will consume the “Last Supper” and ends with the monologue of Judah, which explains his betrayal.

The second part, the “Scinnenza”, performed on Tuesday, tells the Roman procession and the Praetorian, by Pontius Pilate, the Via Crucis and culminates with Christ’s deposition (Scinnenza), accompanied by Judah’s repentance.

The Holy Week ends with the third part, performed on the Palm Sunday, put on stage the Via Dolorosa with the body of Christ, the visit of the apostles to Mary, the temptation of the Virgin and the resurrection of Jesus Christ.

The Real “Maestranza” origins can be traced back to 1551, when it was used as urban militia in defense of Caltanissetta during the Turkish invasion.  It consists of craftsmen, masters, divided into various categories, each one composed entirely of the same profession masters and guided by a general, generally a nobleman.  The centre of the procession, and all other events of the Holy Week, is the captain of Royal Maestranza, a craftsman who is chosen every year by a different artisan classes and who enjoys some privileges during the week:

He has the keys of the city;

he brings his sword to symbolize his power;

he wears a three-color band to symbolize loyalty to state authority.

The office of squire is chosen from the same category of the captain, he takes  a shield and spear;  the historic banner, leading the ancient multicolored flag of true Maestranza,  is governed by the standard bearer.  The parade has different phases: .at first the captain receives the keys of the city by the mayor, all the members of “Maestranza” then go to the atrium of the former Jesuit College, now the Library Scarabelli, where Captain receives a veiled cross of black and steps solemnly into the cathedral, followed by the ten corporations.

All men wear black tuxedos blacks gloves, socks and ties,  some drums set the pace.  After entering the cathedral and having revealed the crucifix, the captain changes in white tie and gloves, untie the flag and removes all black garnemtns

The varicedde and the vare parades are respectively on Holy Wednesday and Holy Thursday.

The Varicedde, in Sicilian literally “Piccole Vare” are a group of nineteen small statuary groups that parade on the night of Holy Wednesday.  16 Varicedde are only smaller replicas of the 16 Vare taken in procession on Holy Thursday.  Each varicedda is decorated with flowers and is accompanied by a musical marching band.  The Varicedde procession was born in the early 1900s when young apprentice of Bottega,  excluded from the Vare procession on Holy Thursday, decided to organize a procession of small terracotta statues, life –size  imitating the  Vare from  San Domenico’s Church to other areas of the old city centre.

The Vare are sixteen statuary groups depicting scenes of the Passion, they are carried in procession on the evening of Holy Thursday: this is by far the most important moment of the Nissena Holy Week, famous throughout the world.  Each vara is followed by numerous people and a marching band, a congregation and some boys in white uniforms who hold the candles in their hands.

The black Christ’s procession, also known as the Lord of the city parade, takes place on Holy Friday.  It is a wooden crucifix which, according to legend, was found in a cave by two vegetable pickers (“Fogliamari”); the black colour of the small statue seems to derive from the smoke of the candles which surrounded it.  The procession is followed not only by numerous worshippers but also by the complete royal staff.  The crucifix is ​​placed on a gilded canopy and is carried by the barefoot “Fogliamari” as a sign of penance.