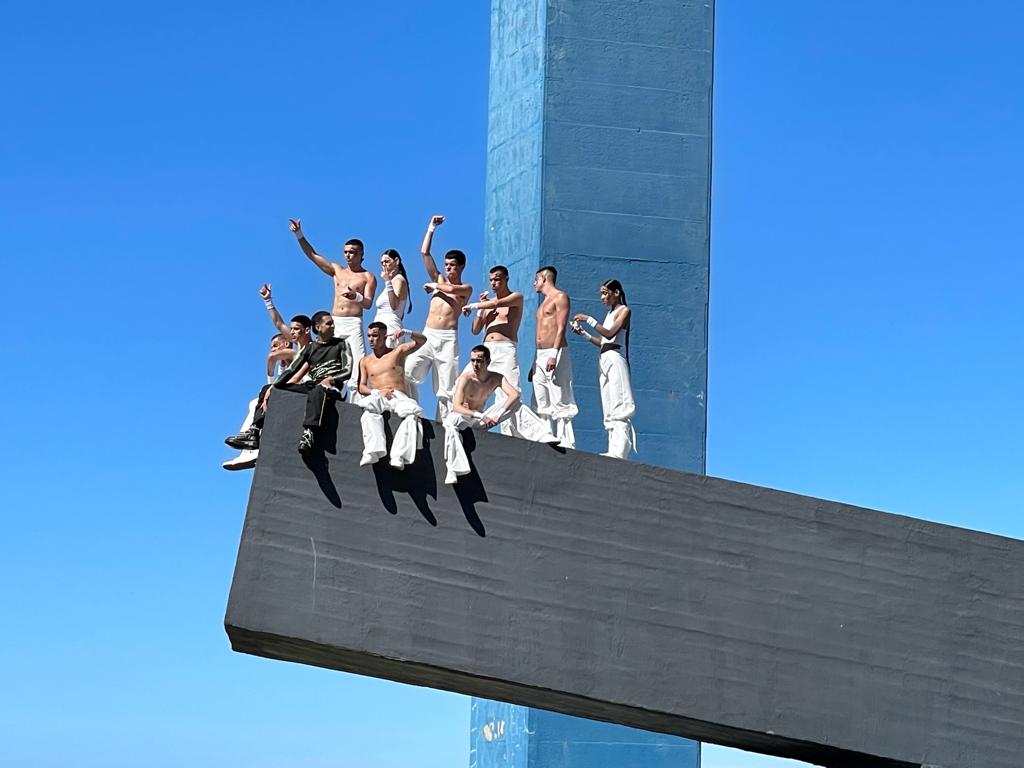 The Fiumara d’Arte is a path of sculptures, which is located in the Sicilian hinterland composed of 11 stages, as many as are the works located between the sky, the sea and the mountains of the seaside village of Castel di Tusa.

Following the path of a river that no longer flows, the ancient stream of Tusa, Antonio Presti has decided to create one of the largest art parks in Europe, creating an art gallery in the open air between the Nebrodi mountains, which hosts some of the greatest artists of the twentieth century, giving glimpses of incredible beauty.

And it is precisely with Beauty that everything begins and ends at the Fiumara d’Arte. The idea of “Fiumara d’Arte” was born in 1982 when, shaken by the loss of his father, Antonio Presti, he thought of dedicating a monument to the memory of his father and turned to the sculptor Pietro Consagra. Imagine right from the start not to make it a simple private fact, but to donate the sculpture to the community, and think of placing it at the mouth of the river. Among the most beautiful sculptures we have: “The material that was not there before” a huge sculpture, about 18 meters high, which testifies to an interweaving of two elements that look, black and white, of full spaces and empty spaces, of life and death, of heavy concrete and light memory.

Immersed in the hilly landscape, it tells a possible harmony between man and the environment; “L’Atelier sul mare”, in Castel di Tusa. A hotel that Antonio Presti himself wanted, within which there are several rooms of art and where the same living room becomes an artistic experience.

“The window on the sea”, is located on the beach of Villa Margi, not far from Castel di Tusa, is the frame that was dedicated by the author Tano Festa to his brother poet: a window on which rests a black monolith. The work has monumental dimensions and represents a triumph of blue that welcomes a corner of the sky, a slice of the sea, and a passage to the boundless infinite; “Mediterranean Energy” is a sinuous sculpture that symbolically combines sea and mountain. A vibrant mantle that asks to be ridden like a wave swelled by the wind, lying on the lawn but pointing to the sky.

In a high ground in the territory of Motta d’Affermo we find another work, the “Pyramid 38. parallel”, the last sculpture that became part of the Fiumara d’Arte. A steel pyramid in axis with the 38º parallel looking at the sea and the archaeological excavations of the ancient city of Halaesa and represents a reflection on the relationship of man with the eternal.

During the days of the summer solstice, “The Rite of Light” takes place here. Only on this occasion, the Pyramid is opened to access the interior visitors who can admire in silence at sunset, from a crack of the Pyramid, the rays filter and radiate their souls.

Finally “Arianna Labyrinth”a physical and inner path on a promontory in Castel di Lucio. You enter through a portal that symbolizes the birth of the human being and you always proceed forward, straight into the structure in concentric circles until you get to the heart. “A journey that seems inside the earth but is under the sky, at the center of which is life”, which makes us remember to always keep our gaze up because we are all under the same celestial mantle.