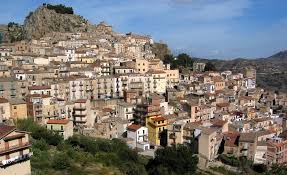 Nicosia is a small town in the province of Enna. Its name perhaps means “The city of San Nicolò” (the name of its patron saint), and was probably built at the time of the Byzantine domination on the island, between the sixth and seventh centuries, as a fortified place for the Christians from Val Demone. With a population of about fifteen thousand inhabitants, it is about forty kilometers from the Tyrrhenian coast and it stands on four hills: Castello, Cappuccini, Monte Oliveto and SS. Salvatore.

Nicosia is also known as the “City of the 24 Barons”, precisely because between the 19th and 20th centuries, the barons were very influential people in Nicosia, and there were 24 of them. Since there are many noble families in Nicosia, it is still possible to admire today, on the portals of their palaces or balconies, their coats of arms, sculptural or pictorial representations of feudal and medieval origin.

The term barony indicates a noble title of feudal origin, granted by the sovereign with the solemn investiture ceremony. The barony required an oath of allegiance and the assumption of particular obligations by the baron towards the sovereign. In the event of rebellion against the latter or of infidelity, the barony could be revoked. The barons could be: with title only, they had only a small fief and had no representatives of their own in the Parliament of the Kingdom. The barons with noble fiefs, in addition to the fiefdom possessed and the noble title; therefore they had more power and prestige. And finally, the barons of noble fiefs with less and mixed Imperio, they not only possessed the fief and the noble title but also exercised civil and criminal jurisdiction with the authorization to impose the death penalty. The noble title usually coincided with the name of their fiefdom, for example, the Baron of Sant’Andrea, the Baron of San Silvestro, the Baron of Santa Maria La Nova, etc.

One of the most famous baronial palaces in Nicosia is the Salomone Palace. The Salomone Palace is located under the cliff of SS. Salvatore and precisely in Via Francesco Salomone. On the main entrance door the coat of arms of the Salomone family, immediately inside, the atrium and the adjacent sheds where you can admire eight ancient carriages in excellent condition. The carriages were used by the noble Salomone family from 1800 until 1950 to circulate in the village and to reach the land properties of the family. Also in the atrium, there are some showcases containing a wonderful collection of harnesses, spurs, saddles and whips. While in a caved room, dug into the stone, you can admire many agricultural tools and containers no longer used. Upstairs a series of rooms and halls were used for the daily life of the Salomone family. Adjacent to the rooms, reachable from the inside, you can admire the hanging garden, from which you can enjoy the fascinating landscape of the city. The garden is still full of rare exotic plants such as Feijoa. On the same floor the precious library, jealously guarded, boasts several thousand ancient volumes including a beautiful collection of incunabula and sixteenth century texts. In the library, there is a collection of texts on history, customs and traditions of the city, as well as a manuscript, transcribed by the Baron Gentile of Morocco and donated to the Salomone family, which faithfully reproduces the text of the apostolic protonotary of the church of S. Nicolò, Don Santo De Luca, who provided in one of his manuscripts a detailed description of the Casazza of Nicosia, a religious representation of scenes taken from the Old Testament and the New Testament.

I A Liceo Classico