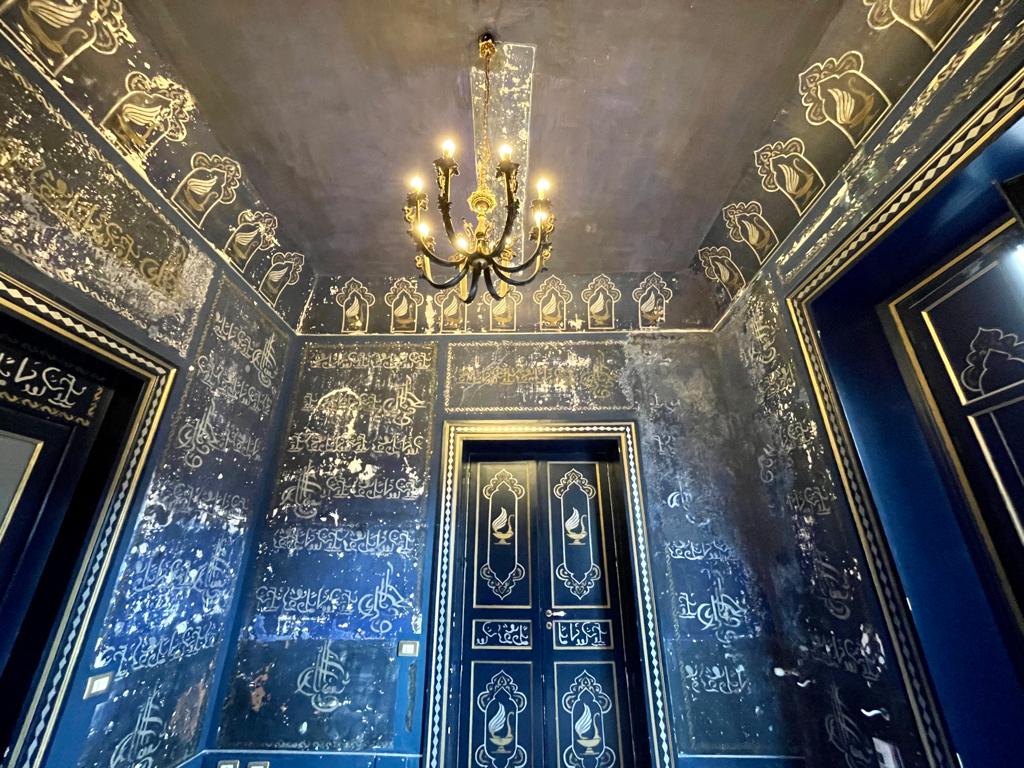 THE CHAMBER OF WONDERS IN PALERMO

AN INTERVIEW WITH THE OWNER GIUSEPPE CADILI

The Camera delle Meraviglie, also known as the Stanza Blu, was discovered in Palermo during the renovation of an apartment located in a historic building in Via Porta di Castro near the Ballarò market. Experts from all over the world have come to admire it and to unveil the mysteries related to this extraordinary chamber.

We would like to express our gratitude to Giuseppe Cadili for offering us the opportunity to interview him and for taking the time to answer our questions.

The discovery of the Chamber of Wonders in 2003 aroused the interest of academics, art experts and Islamists from all over the world. What are the various hypotheses made by scholars regarding the purpose of the room?

As soon as the news appeared in the newspapers, many scholars of Islamic art immediately asked to come and visit the blue chamber. They came from various parts of the world, from the United States, France and England. Everyone entering the room exclaimed: “It’s a wonder” and so we called it the Chamber of Wonders. These experts made the hypothesis that it was a so-called “Turkish room” – a trend that spread throughout Europe in the second half of the nineteenth century -, that is, a room which was reminiscent of the atmosphere of the East, a room for rest and relaxation to delight the guests.

A few weeks later the well-known art critic Vittorio Sgarbi came, and he was particularly impressed by the decorations. He had never seen anything like it before. After an accurate study he pointed out that, in his opinion, it was a meditation room and those silver and gold inscriptions on a blue background represented a sort of message that the owner wanted to give to those who entered. He defined the walls as an open book.

According to researchers the inscriptions in Arabic that recur on the walls are not only decorative, but they might also have a spiritual meaning. A sequence of musical notes has even been identified. Could you tell us about these findings?

The inscriptions were deciphered by two scholars from the University of Bonn – Institute for Oriental and Asian Studies (IOA), Sarjoun Karam, an Arabist and a poet, Professor of Arabic Language, and Sebastian Heine, an Iranologist and a specialist in Oriental Languages. They remarked that it was a spiritual room, a room that symbolically represents the moment of the creation of the Universe by Allah. According to the researchers from Bonn, the Camera delle Meraviglie is a unique example of its kind in the world. The writings are all the same in an endless loop. The two biggest monograms recall the tughra, the seal or signature of a sultan, they are invocations to the Divine and they bring good luck. So, the writing, which is a phrase that is always the same and repeats itself endlessly, was deciphered about two years later. They are Arabic fonts, not decorations, and the meaning is: “Praise be to God, there is nothing like Him”.

But the discoveries do not end here. By overlaying music paper on the writing, a composer from Palermo found a sequence of twelve notes. A perfect theme that can be played and read from left to right and viceversa. The composer is Giuseppe Mazzamuto, a vibraphonist and percussionist of the Sicilian Symphonic Orchestra. But non only this. The Arabic writing, reading it from left to right reveals another meaningful phrase in the Latin language: “Recto lucet” (Shines with righteousness), as noted by Vittorio Sgarbi and the mayor of Palermo Leoluca Orlando, who were the first to listen to this ‘celestial’ melody, as defined by the Corriere della Sera journalist Felice Cavallaro who got the scoop. Sgarbi also said that in the Camera delle Meraviglie the East and the West, Islamic culture and Christian culture, live peacefully together. And this discovery makes us understand that Palermo has always been a welcoming and intercultural city.

It was my wife Valeria who had asked the music master Mazzamuto to do this study. And once again, it all happened by chance. One night, among the visitors that came at our home, there was a girl, an ethereal figure. As soon as she saw my wife, she said to her: “Have you ever considered that this writing could be a musical score”. And so, we turned to the music master Mazzamuto. At first, he seemed skeptical; then one day he called us and said:” The writing is a perfect theme”. “The discovery – as Mazzamuto himself has stated – was the result of months of investigation and restless nights, and the fact that the writings were all carried out by hand made the piece of research much more complicated. So, first I compared all the writings within the room. At that point it just came to me when I mentally overlayed the music paper and found a correspondence between the symbols (neumes) and the place they occupied on the staves of the music paper. This mental projection was naturally followed by a practical transposition thanks to a musical pentagram on transparent paper that I overlayed on top of the final graphics, which were the result of the comparison of the phrases present in the room: the neumes that appeared perfectly fit in the spaces of the pentagram, so I turned them into musical notes, and then I made an arrangement for orchestra. Amazingly, the melody makes sense either by playing it from left to right or from right to left. My research work is still underway in order to figure out new meanings regarding music semiology. The thrill of discovery was overwhelming, and it is the proof that music is able to go even beyond words, this melody is a true message of peace between different cultures.

At the time when the Arabic writings were painted, the building belonged to Stefano Sammartino, Duke of Montalbo, a man allured by Masonic doctrines. Could he have been the patron of the Camera delle Meraviglie, which was perhaps allotted to esoteric rites as well?

This was an assumption made by some scholars. It is quite clear that whoever commissioned the decoration of the room must have been a man of great culture and sensitivity, a man who was well acquainted with the Arabic culture and insisted on reviving it in this room.
When the decoration was painted in the second half of the nineteenth-century, Palermo was a cosmopolitan city and there was a noteworthy cultural ferment. At that time mind that Michele Amari, an important Arabist, lived in Palermo and who knows maybe he could have been the mastermind behind this extraordinary room.

A professor at the Polytechnic University of Turin has written that the Blue Chamber is merely an example of the nineteenth-century arabesque architecture which was part of the European tradition of impressing guests with rooms that evoked the East. What do you think about this interpretation?

I would not say “merely”. I’d rather say it is an extraordinary discovery that doesn’t happen every day. This is another fascinating explanation which makes me realize how much interest the room has aroused and continues to arouse among scholars and many others. My wife and I are so pleased to share this finding with those who appreciate the exceptional artistic and architectural richness of our city.

The colors of the room, the Arabic writings, the tughras and the symbology of the numbers, such as the seven oil lamps on the vault and the five flames rising from the brazier, undoubtedly create a magical and spiritual atmosphere. What do you feel when you are in the blue room?

That’s right. Every time I enter this room, I feel a positive energy that I cannot explain in words. It is an intimate moment that reminds me of the words that the two academics from Bonn told us: “Only you could discover this room because your surnames (my wife’s surname and mine) derive from Arabic. Cadili comes from the Arabic “qadi” which means “the judge”, while my wife’s surname comes from the Arabic “dscharas”, meaning “bell”. This is how Arabs called the Christians because, when they met for religious services, they rang the bells as is also the case today. For about a century, the decorations remained concealed under four different layers of color; eventually, by chance or by fate, we discovered them and made them known to the world. It sounds like a fairy tale, but it’s all true!