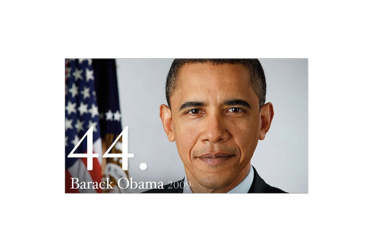 Barack Obama, a senator from Illinois, became the 44th president of the USA. After beating Hillary Clinton in the Democratic primaries, who looked like a foretold winner, he also defeated his Republican rival, John McCain. His election was very important because, for the first time in its history, the US elected a black president.

In America, the president is elected by the citizens in a complicated system involving so-called ‘big voters’. The United States is a federal state, i.e. a nation made up of 50 different states. Each of the US states periodically elects deputies and senators in proportion to the number of inhabitants who live there: the more inhabitants a state has, the more representatives (i.e. deputies and senators) it will have in Washington. The total number of US congressmen and senators is 538.

In practice, American citizens do not directly vote for the president they want, but for the person who, if elected, will vote for him or her and enable them to win. In the US, unlike in our country, voting can be done in many ways, including by mail.

In 48 out of 50 states, the person who gets one more vote than the opponent becomes a major voter (two states have a different system).

Since there are 538 large electors (like the US congressmen and senators), to become President of the United States you need the votes of 270 large electors (i.e. an absolute majority, half + 1).

After that they will have to wait sometime for the new president to be sworn in and take office, thus formally assuming his powers. The US president remains in office for four years and can only be re-elected once.

Just as it was said for Kennedy that he won thanks to television; forty years later US President Obama would win thanks to social networks.

If one had to find a word to describe Obama’s communication strategy, especially in reference to the first presidential campaign in 2008, none would be more appropriate than ‘viral’. Viral was the way in which the slogan chosen by the Democratic candidate (‘Yes We Can’) quickly became synonymous with renewal and civil commitment. Viral was the involvement of volunteers in activities that were anything but virtual, such as door-to-door fundraising, which led, at the end of the election campaign, to a budget raise of over 600 million dollars. Viral was, above all, the circulation on the Net of the contents created ad hoc for the campaign, thanks to a multitude of click activists – keyboard activists, who participated in the cause almost exclusively online – who became passionate about the cause.

Obama is now considered a ‘communications strategist’. At the time, about 55 % of the American population logged on to the Internet to take part in the election campaign or to find out about it by searching for information on politicians and parties, sharing it through e-mails, messages, or posts on the main social networks or exchanging opinions by commenting on the election campaign with other users.

Obama’s official Facebook page is by far the most followed among political figures. The numbers on Obama’s YouTube channel, however, are the most surprising. After the now-famous speech on race, Obama’s team uploaded more than 2,000 clips during the entire march to the White House, and the videos published have gained views for a total of about 14.5 million hours. If he had had to invest in traditional TV spots and airtime, it would have cost the Democratic candidate an estimated $47 million.

What was striking about his strategy was transparency: Obama chose to make all the measures taken by his administration public and accessible to everyone through the official White House website, thus strengthening the relationship of trust with his voters.

Timing: the importance of being in the right place at the right time. Omnipresence: According to the New York Times (in a 2009 article entitled “The Message is the Message”), President Obama has been present at 15 town hall meetings, has appeared in at          least 800 pictures on the White House noticeboard, and has held at least four prime-time press conferences in his few months in office, just as Bush did in his last year in office.

Being everywhere, in fact, is a very precise – and indispensable – strategy if you want to reach your stakeholders through all available channels.

In conclusion, Barack Obama remains one of the best presidents America has had in the last century.