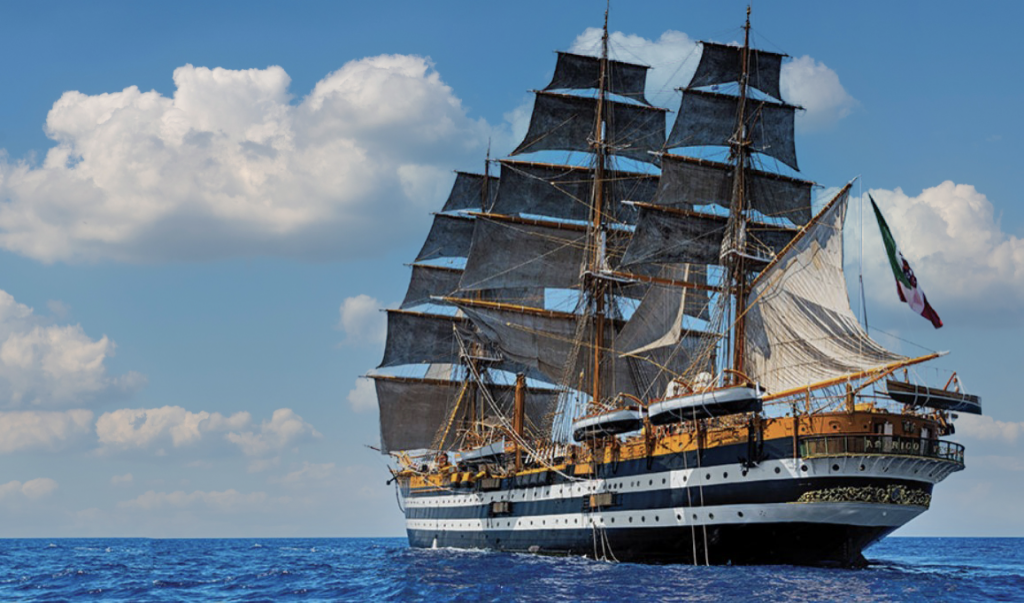 The Amerigo Vespucci is the legendary Navy training ship considered ‘the most beautiful in the world.

Entirely built and set up at the Royal Shipyard of Castellamare di Stabia, it was launched on February 22, 1931 and entered service as a training ship on June 6, adding to its sister Cristoforo Colombo (slightly smaller), three years more reality. elderly, with whom he formed the “School Ships Division” under the command of Admiral Cavagnari.

Since its entry into service, the ship has carried out training activities every year (with the exception of 1940, due to war events, and in the years 1964, 1973 and 1997, for extraordinary works), mainly in favor of the students of the Naval Academy, but also of the students of the Naval College, of the notchery students, as well as of young people belonging to sailing associations, such as the Italian Naval League, the Sail Training Association – Italy and also the ANMI.

In addition to numerous short campaigns in the Mediterranean, carried out mostly in the spring and autumn period, from 1931 to 2013 the Amerigo Vespucci carried out 79 Education Campaigns in favor of the 1st Class students of the Naval Academy, of which 42 in Northern Europe, 23 in the Mediterranean, 4 in the Eastern Atlantic, 7 in North America, 1 in South America and 2 in the context of the only circumnavigation of the globe, carried out between May 2002 and September 2003, a period in which the ship was was involved in the activities connected with the 2003 America’s Cup in New Zealand.

The Amerigo Vespucci is a sailing ship with engine, armed with three vertical masts (foremast, main and mizzen), all equipped with flagpoles and square sails, plus the bowsprit protruding at the bow, in effect a fourth mast.

At the bow of the ship is the figurehead, which represents Amerigo Vespucci, made of gilded bronze. Characteristic of the ship are the friezes on the prow and the arabesque on the stern, in wood covered with pure gold leaf.

Her crew is normally composed of 264 soldiers, integrated, during the Education Campaign, by the Allievi (about 100 a year) and by the support staff of the Naval