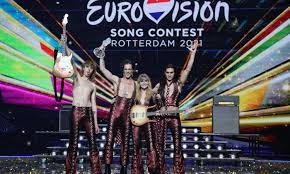 Maneskin is an Italian music band active since 2015. The members, all from Rome, are the leader Damiano David, the bassist Victoria De Angelis, the guitarist Thomas Raggi and the drummer Ethan Torchio. The Maneskin achieved fame in 2017 thanks to the victory of the X-Factor program and in 2021 with the victory of the 71st Sanremo Festival with the song Zitti e buona. They also win the Eurovision Song Contest 2021 on 22 May.

The Maneskin are a pop rock and funk rock group, formed in 2015 in Rome. Famous is the photo that portrays them, very young, performing in the middle of Via del Corso singing in the street. They achieved notoriety in 2017 following participation in the eleventh edition of X-Factor Italia, thanks to which, despite having finished second, they signed a contract with the Sony Music record label. Their first album, Il ballo della vita, was released in 2018, enjoying great success, thanks above all to the singles Morirò da re and Torna a casa.

They quickly and exponentially reach success, both with the public and critics. In 2020 their participation in the 71st Sanremo Festival 2021, conducted by Amadeus, is announced.

The Maneskin see their origin from bassist Victoria De Angelis and guitarist Thomas Raggi have known each other since middle school, but only in 2015 they decided to found the group. The singer and frontman Damiano David joins it later, and finally, through an announcement posted on Facebook, drummer Ethan Torcio answers the call. The members of the group are all very young. Damiano was born on January 8, 1999; Victoria on April 28, 2000; Ethan on 8 October 2000 and Thomas, the youngest, on 18 January 2001. They are all born, raised and live in Rome.

In 2017 they participate in the eleventh edition of the X-Factor Italia talent show. They pass the first stages of the program already with great success, and during the show their notoriety increases. The judges of that edition were: Fedez, Levante, Mara Maionchi and Manuel Agnelli (their guide and mentor). They are classified in second place (Lorenzo Licitra wins). During the talent show their hit single Chosen is released, certified double platinum by FIMI. They quickly established themselves in the panorama of Italian music.

In 2018 they were guests at Che tempo che fa by Fabio Fazio, at the program E poi cè Cattelan by Alessandro Cattelan, and at Ossigeno, hosted by Manuel Agnelli.

The Maneskin career once they have achieved success at X-Factor is fulminating. On 23 March 2018 their second single, Morirò da re, is released, certified double platinum. On April 28th they are guests of Saturday Night Live, hosted by Claudio Bisio. On June 16 the Maneskin participate in the seventh edition of RadioItaliaLive – The concert, and then perform at the sixth edition of the Wind Summer Festival. On September 6, during their 2018 autumn tour, they open the Imagine Dragons concert in Milan. On September 28th they released the single Torna a casa, which was a huge success, becoming the first single of the Maneskin group to reach the top of the FIMI Top Singles, then being certified fivefold platinum. On October 26, 2018, the group’s first studio album, Il ballo della vita, was released. To present the disc, the docufilm This Is Måneskin was screened in some Italian cinemas on 24 October.

The album was followed by a European tour, Il ballo della vita Tour, which was sold out in each of the scheduled stages, which led the group to add new dates in the following summer period. In September 2019, the Maneskin released the video of The distant words, the latest excerpt from the album, which immediately ranks in the trends of YouTube Italy. The band identifies this last song as one of the closest to their project and to which they are most closely linked.

The Maneskins as winners of the Sanremo Festival represent Italy at Eurovision, the singing competition that compares all the winners of the song festivals of each nation. The Maneskins at Eurovision start favorites and have already won the award for best text (like Mahmood in 2019): the jury rated the song as disruptive and raw that the jurors liked so much that they rewarded it. Damiano commented saying:

This is the prize prize of my life that I win as an author: he will never forget it.

On December 17, 2020 the participation of the Maneskin group is announced, participation, among the 26 Big, in the Sanremo 2021 Festival. The Maneskin will compete with the song: Zitti e buona. In the evening dedicated to the duets and covers of Sanremo 2021, the Maneskin interpret “Amandoti” by CCCP in a duet with Manuel Agnelli.