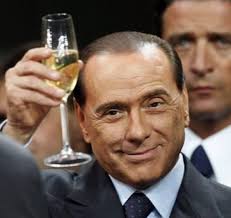 Silvio Berlusconi: “descent into the field”

Silvio Berlusconi was born in Milan in 1936. He attended classical studies, and then graduated in law. He entered politics with the football metaphor: “descent into the field”, on 26/01/1994, through a 9 minute television message.

The name “Forza Italia” takes up the world’s cup slogan of 1982, won by the Italian national team.

His kind of election campaign, is considered the result of a wide debate; his victory has gone down into history as the beginning of the “Second Italian Republic”. Its program included:

“Forza Italia” with other political parties founded the “Pole of Freedom”, that won with the 42,9% of votes.

Silvio Berlusconi is even remembered as a great businessman, for this reason his supporters were divided in: “pigeons”, those who wanted him to stay in the business field, and “hawks”, the supporters who wanted his participation in politics.

His term as president lasted 7 months, where he would be succeeded by Romano Prodi.

He’ll remain in the opposition for five years, with a lot of judicial inquires, fraud, false financial statements and sentences, later end up in statute of limitations. In 2001 Berlusconi won the elections again, becoming prime minister, leading the “house of freedom”.