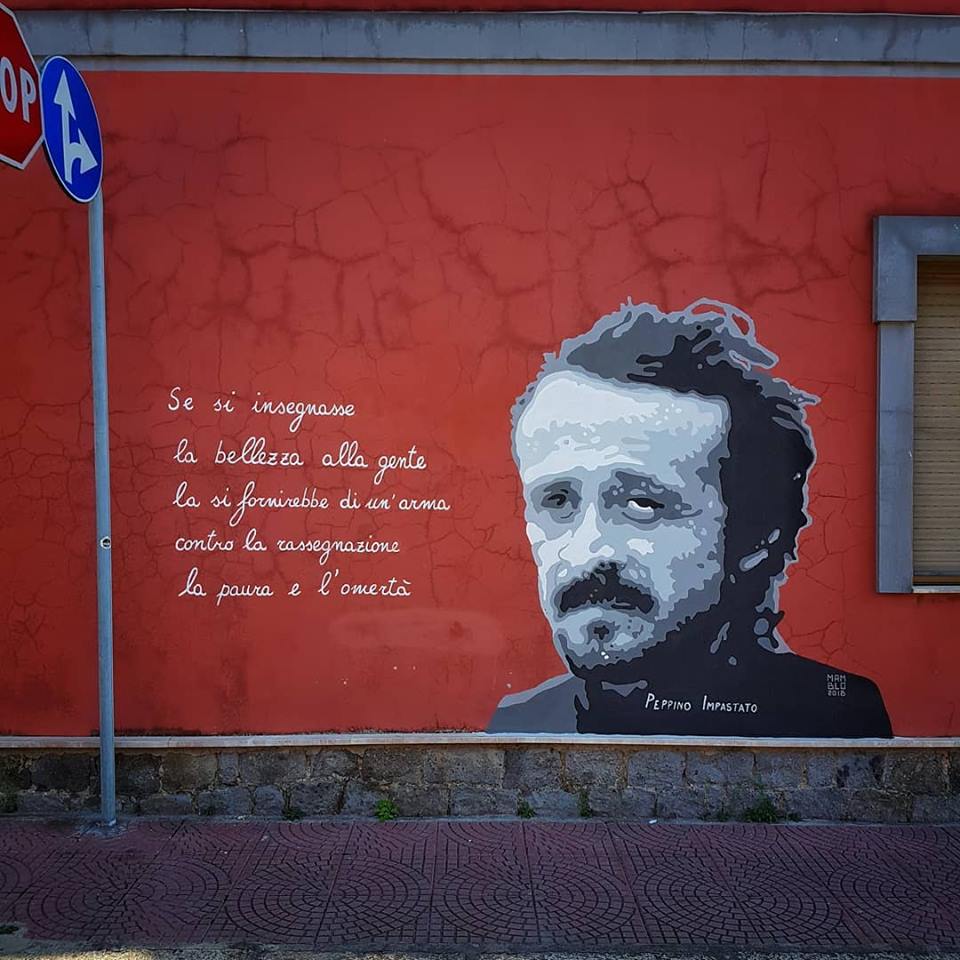 PEPPINO, STILL ALIVE THROUGH HIS COURAGE AND FIGHT.

43 years ago on this exact day Mafia killed Giuseppe Impastato, also known as Peppino, but they couldn’t stop his courage and fight in this world. He was an Italian journalist, radio host and activist, member of Proletarian Democracy and known for his complaints against the activities of the Cosa Nostra, following which he was assassinated on May 9, 1978. He was born in Cinisi, in the province of Palermo, on January 5, 1948, from a mafia family: his father Luigi had been sent to confinement during the fascist period, his uncle and other relatives were mafia and his father’s brother-in-law, Cesare Manzella, was the head of the town, killed in 1963 in an attack with an Alfa Romeo Giulietta stuffed with TNT.

The boy soon broke off relations with his father, who kicked him out of the house, and started a political-cultural left-wing and anti-mafia activity. In 1965 he founded the newspaper L’idea socialista and joined the PSIUP. From 1968 onwards he participated, with the role of manager, in the activities of the new communist groups, such as Il manifesto and, in particular, Lotta Continua. He led the struggles of the expropriated peasants for the construction of the third runway of the Palermo airport in the territory of Cinisi, of the construction workers and of the unemployed.

In 1976 he set up the Musica e cultura group, which carried out cultural activities, in 1977 he founded Radio Aut, a self-financed free radio, with which he denounced the crimes and affairs of the mafia members of Cinisi and Terrasini, first of all of the mafia boss Gaetano Badalamenti (sarcastically defined ” Tano Seduto »da Peppino), who had a leading role in international drug trafficking, through the control of Punta Raisi airport. The most popular program was Onda pazza a Mafiopoli, a satirical show in which Peppino mocked the mafia and politicians.

In 1978 he ran for the Proletarian Democracy list in the municipal elections, but did not have time to know the outcome of the votes because, after various warnings that he had ignored, during the electoral campaign he was assassinated on the night between 8 and 9 May by Gaetano Badalamenti. An attack was staged with his corpse, to destroy his image as well, in which the same victim appeared as a suicide, placing a charge of TNT under his body lying on the railroad tracks. A few days later the voters of Cinisi still voted for his name, managing to symbolically elect him to the City Council.

Press, police and the judiciary spoke of a terrorist act in which the bomber was allegedly killed and of suicide after the discovery of a letter, which in reality did not reveal suicidal intentions. The crime, which took place in the middle of the night, went unnoticed, as about ten hours later the lifeless body of the president of the Christian Democrats Aldo Moro was found in via Caetani in Rome.

The epitaph engraved on Peppino’s tomb in Cinisi reads as follows: “Revolutionary and Communist militant – Murdered by the Christian Democratic mafia”. The mafia matrix of the crime was identified thanks to the activity of his brother Giovanni and his mother Felicia Bartolotta who publicly broke with the mafia relationship, by Umberto Santino and his wife Anna Puglisi, thanks also to fellow militants and the Sicilian Documentation Center of Palermo , which was founded in Palermo in 1977 and named after Giuseppe Impastato in 1980. On the basis of the documentation collected and the complaints presented, the judicial investigation was reopened.

On 9 May 1979 the Sicilian Documentation Center organized, with Proletarian Democracy, the first national demonstration against the mafia in the history of Italy, which was attended by 2000 people from all over the country.

In May 1984 the Education Office of the Court of Palermo, on the basis of the indications of the Judge Advisor Rocco Chinnici, who had conceived and started the work of the first anti-mafia pool and had been assassinated in July 1983, issued a sentence, signed Instructor advisor Antonino Caponnetto, Chinnici’s substitute after his death, in whom the mafia matrix of the crime was recognized, but attributed to unknown persons.

The Centro Impastato published in 1986 the life story of Giuseppe Impastato’s mother, in the volume “The Mafia in my house” and the Notissimi ignoti dossier, indicating as the instigator of the crime the boss Gaetano Badalamenti, in the meantime sentenced to 45 years in prison for drug trafficking by the New York Court in the Pizza connection trial.

In January 1988 the Court of Palermo sent a judicial communication to Badalamenti. In May 1992 the same court decided to dismiss the Impastato case, reaffirming the mafia matrix of the crime, but excluding the possibility of identifying the culprits and hypothesizing the possible responsibility of the Cinisi mafia allies of the Corleonesi.

In May 1994, Centro Impastato presented a request for the reopening of the investigation, accompanied by a popular petition, asking that the new collaborator of justice Salvatore Palazzolo, previously affiliated with the Cinisi mafia, be questioned about the Impastato crime. In March 1996 the mother, brother and Centro Impastato presented a complaint in which they asked to investigate unclear incidents, in particular concerning the behavior of the carabinieri immediately after the crime. In June 1996, following the statements by Palazzolo, who indicated Gaetano Badalamenti as the instigator of the murder together with his deputy Vito Palazzolo, the investigation was formally reopened. In November 1997 an arrest order was issued for Gaetano Badalamenti, indicted as the principal of the crime. On March 10, 1999, the preliminary hearing of the trial against Vito Palazzolo took place, while Badalamenti’s position was removed.

The family members, the Centro Impastato, the Communist Refoundation, the Municipality of Cinisi and the Order of Journalists asked for a civil party and their request was accepted. On November 23, 1999, Gaetano Badalamenti renounced the preliminary hearing and asked for immediate judgment.

In the hearing of January 26, 2000, the defense of Vito Palazzolo asked that the abbreviated procedure be carried out, while the trial against Gaetano Badalamenti would take place with the normal procedure and by videoconference. On May 4, in the proceedings against Palazzolo, and on September 21, in the trial against Badalamenti, the requests for a civil action of the Centro Impastato, of the Rifondazione Comunista and of the Order of Journalists were rejected.

In 1998 a committee on the Impastato case was set up at the Parliamentary Anti-Mafia Commission and on 6 December 2000 a report was approved on the responsibilities of institutional representatives in misleading investigations. The positions in favor of the hypothesis of the terrorist attack of the following soldiers of the Carabinieri were made known: Major Antonio Subranni and Marshal Alfonso Travali. On March 5, 2001, the Assize Court found Vito Palazzolo guilty and sentenced him to thirty years’ imprisonment. On 11 April 2002, Gaetano Badalamenti was also found guilty and sentenced to life imprisonment.

A little-known aspect of Impastato’s journalistic activity was his investigation into the Alcamo Marina scene, in which two carabinieri were killed and five local young men were accused by the soldiers commanded by Giuseppe Russo; it will later be discovered that they were tortured to extract false confessions. The massacre was probably linked to the mafia and elements of the Gladio Organization colluded with the carabinieri themselves. It is not known what the activist of Proletarian Democracy had discovered on the scene, since the folder with the documents on Alcamo Marina was seized by the Carabinieri in the house of his mother Felicia, shortly after Peppino’s death, and was never returned, unlike the other documents (how to tell from his brother Giovanni). The investigations subsequently also concerned the initial misdirection of the real matrix of the murder and were carried out by the Palermo Prosecutor’s Office, in the persons of the magistrates Antonino Di Matteo, Roberto Tartaglia, and Francesco Del Bene.