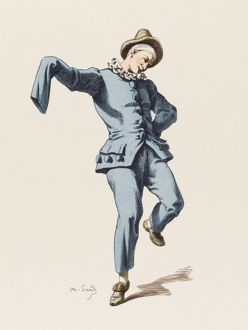 Carnival has arrived! It is one of the most awaited holidays for adults and children.

Masks have always been an important feature of Carnival.

In Italy there are many regional masks: Pulcinella in Naples, Stenterello in Firenze, Arlecchino in Bergamo, Pantalone and Colombina in Venice, Rugantino in Rome, Balanzone in Bologna and many others.

These masks derive from the characters of the comedy of art or puppet theater and in tradition they were born with the intention of driving out winter and opening the doors when spring arrives.

Sicily also has its own mask, represented by Peppe Nappa.

Now I will tell you the history, origins and character of this carnival costume, typical of my region.

Peppe Nappa is a seventeenth-century comedy character from the city of Palermo.

He is a lazy slacker servant who does not follow his master’s orders.

“Nappa” in Sicilian means “patch of pants” and this name indicates the poor origins of this mask.

Peppe Nappa liked sleeping very much, he always looked for food and was very greedy, sometimes even smart, but when he was discovered, he paid all the consequences of his attitudes.

Peppe Nappa’s costume is a light blue dress with large buttons, a sash at the neck, very long sleeves and pants.

He wear a felt hat and white shoes with buckles. During many Sicilian celebrations, Peppe Nappa gives out wine and sausages.

In the 1950s Peppe Nappa became the symbolic mask of the Sciacca carnival, one of the most important in Sicily.

Unfortunately this mask is little known to children.

A little less TV and mobile phones and a greater knowledge of our traditions and our history would be good for kids to rediscover the spirit of the past, which is less and less present today.