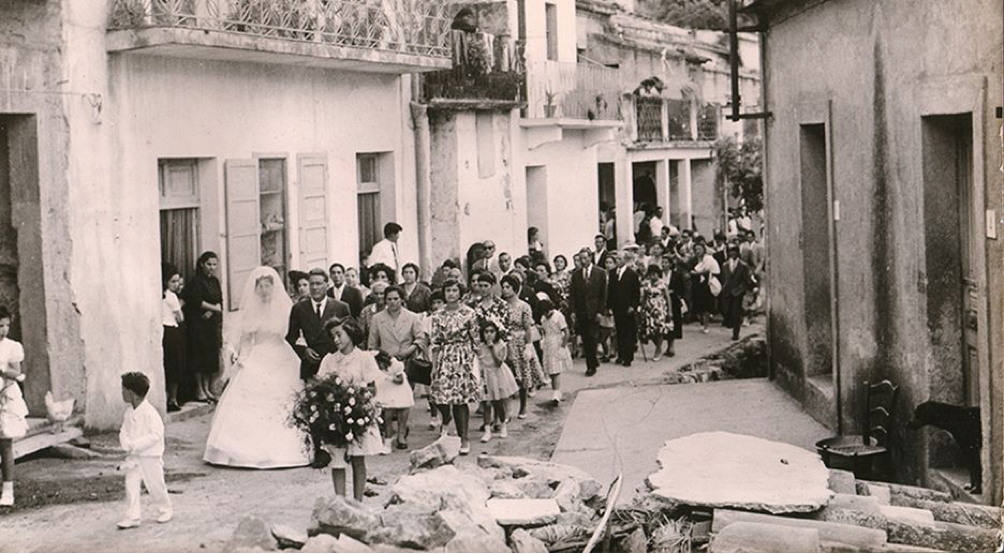 Since ancient times, marriage meant perpetuating life through the union of man and woman that gave birth to children. The constitution of a new nuclear family has always represented an event of great importance that lays the foundations for and customs, traditions and superstitions.

To pay homage to my land, Sicily, I would like to propose an analysis in which we will examine the various phases and also some curiosities of this ritual, referring to a typical Sicilian peasant wedding of the past.

THE AGE TO GET MARRIED

“Fimmina a diciuòtto e màsculu a vintuòttu”: this proverb leads us to deduce that the marital age for women should not exceed eighteen years, instead for men twenty-eight years, in any case they could only get married after completing military service.

Women were looking for a husband, because they lived in the countryside and were forced into a closed family nucleus, so they wanted to escape. They looked for a husband using their imagination and asked for the grace to find him; among the many divinations, there is a very interesting one. Women put three broad beans under the pillow (one peeled, one unpeeled and one pinched). When they woke up in the morning, they took one at random: if it was the one with the peel, the future husband would be economically solid; if unpeeled, on the contrary, he would be poor; finally, if they took the pinched one, the prediction was that of a man with fair economic conditions.

The date chosen for the wedding was on Sunday or on public holidays; with the exception of two months, May and August, that could not be chosen. This custom goes back to the time of the ancient Romans, who first in May (when they had a calendar of ten months) and then in August (when they brought the year to twelve months) commemorated their dead and marriages were forbidden. Moreover, not even the days of Tuesday and Friday were chosen, because the first was dedicated to the god of war, Mars; the second, although dedicated to the goddess of beauty and love, Venus, was the unlucky day par exellance.

The participants formed a procession that started from the bride’s house and ended at the church. The groom, surrounded by male relatives and friends, was in the front; instead, the bride, surrounded by her mother, sisters, female relatives and friends, was behind. The bride’s dress has not always been white, in fact, in the nineteenth century in various Sicilian cities there were other colours, ranging from light colours such as sky blue and dark colours such as black.

At the end of the celebration, they came out of church from the central door, where the married couple received wishes from all the guests. On this occasion, there were different customs in the various cities: for example in Assoro, wheat and salt were thrown on the married couple, or in Siracusa salt and spelt (the latter was a symbol of fertility). Then, people composed again the procession and had to go on a way different from the first one. This time the men were behind the women.

When they arrived at the house of the bride’s parents, they had lunch at noon and it would end in the evening. Here a poet, generally one of the friends of the group, took part in the celebration, exhorting to drink a toast and reciting poems. There were also musicians and dances began with the first dance performed by the married couple. At a certain point, it was time to put an end to the wedding feast. Usually the bride’s father urged the guests to leave the house and to accompany with torches the couple to their new house.

In general, the wedding banquets were more abundant and rich in wealthy families; more modest, but still “consecrated” by economic efforts, among the poorest families.

Among the first courses, people preferred “arancini/arancine di riso”; “maccarrùna di ziti” with sauce, (this name means precisely “boyfriends’ maccheroni”); “pasta al forno”, and the characteristics of these meals differed according to the origin of various cities or provinces.

Among the main courses of meat, were more common the ovines, in particular baked “kids and lambs”, in mountain towns, but also poultry and pork, cooked in every possible manner. Instead, the main courses of fish were found in the fishermens’ families: usually large in size or presented “cooked in bread dough”. As side dishes, according to the seasons, there were “oranges salads”, “wild asparagus”, “caponata” and “roasted artichokes”.

Depending on the social class, the sweets started with “mustard”, “quince jam” and “dried figs”; and then moved on to the best of pastry, namely “cannoli” and “cassata”; in addition, there were certainly the typical sweets of the place of belonging.

Another old tradition was the distribution of “confetti”, which today are elegantly enclosed in special favors.

The boyfriend never had to send the girl neither cat-shaped sweets nor quinces (in Sicily, these symbolize bitterness, so they allude to a departure); the fiancée never had to send a small knife, as it is the weapon of Mars, hostile to marriages.

When the groom put the ring on the bride’s finger, he had to go all the way; if he stopped at the first or second phalanx, it was a sign that the role of command in that house was destined for women.

During the celebration the married couple received the blessing on their knees, but when they got up, they had to be careful to do it at the same time. In fact, if one of the two got up first, he or she was destined to die.

There were two candles lit next to the altar. If they shone with the same light, it was a good sign; instead, if one of the two was dim or tended to burn out, the one closest to that candle was destined to die first.