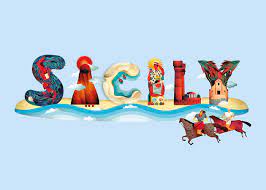 Sicily, officially called the Sicilian Region is an autonomous Italian region with a special statute of 4 840 876 inhabitants, with the capital Palermo.

The territory of the region consists almost entirely of the homonymous island, the largest of the Italian and Mediterranean islands, as well as the 45th largest island in the world, bathed in the north by the Tyrrhenian Sea, in the west by the Strait of Sicily, in the south-west from the Sea of ​​Sicily, to the south-east from the Malta Channel, to the east from the Ionian Sea and to the north-east from the Strait of Messina, which separates it from Calabria, with the remaining part consisting of the archipelagos of the Aeolian, Egadi and Pelagie, as well as from the islands of Ustica and Pantelleria.

It is the largest region in Italy and the fifth by population, after Lombardy, Lazio, Campania and Veneto. Its territory is divided into 391 municipalities, once constituted in three metropolitan cities, Palermo, Catania and Messina, and six free municipal consortia.

Sicily was united to the Kingdom of Italy in 1860 with a plebiscite, following the expedition of the Thousand, led by Giuseppe Garibaldi during the Risorgimento. Since 1946 Sicily has become an autonomous region and since 1947 it has once again had its own parliament, the Sicilian Regional Assembly or ARS, established even before the birth of the Italian Republic.

What are the places not to be missed during a trip to Sicily? The places to mention would be many, but the top ten of the most emblematic places in the region cannot fail to include:

1. Taormina: refuge of artists, in a panoramic position between the sea and the mountains, is a refined town, which holds splendid treasures, such as its incredible Greek Theater

2. Ragusa Ibla: it is the oldest district of the city of Ragusa, which rises from the top of the hill between the Iblei mountains, and which boasts more than fifty churches and noble palaces

3. Scala dei Turchi: with its white cliff that rises above a very blue sea, it is one of the most beautiful beaches in all of Sicily

4. Aeolian Islands: seven islands, each one different from the other, with dream beaches and coves and two active volcanoes for trekking

5. Syracuse and the island of Ortigia: an extraordinary city of art with one of the largest archaeological areas in the Mediterranean

6. Palermo: from the Norman to the Arab style, from the Greek to the Spanish testimonies, the regional capital is a melting pot of cultures and a place of lively local markets

7. Agrigento and the Valley of the Temples: the city is a popular destination thanks to its perfectly preserved archaeological park, the largest in the world

8. Noto: it is the undisputed capital of Sicilian Baroque, with an artistic heritage of exceptional churches and palaces

9. Lampedusa: boasts a splendid sea and beautiful beaches, such as Isola dei Conigli, ranked among the most beautiful in the world

Seven Sicilian sites appear in the list of UNESCO World Heritage Sites: in addition to the baroque cities of Noto, Modica and Ragusa, the Aeolian Islands, the Valley of the Temples in Agrigento and Syracuse with the rock necropolis of Pantalica, they have obtained this prestigious recognition also of Etna – as one of the most emblematic and active volcanoes in the world -, the Villa Romana del Casale, in Piazza Armerina, and the Arab-Norman Route of Palermo, Monreale and Cefalù, an itinerary of discovery in Arab history- Norman with great artistic contents.