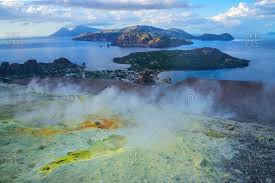 Sicily breathes millennia of history intertwined with ancient myths and taleshanded down by our ancestors. There are many stories that sound credible and others that seem absurd to incredulous eyes, but which conceal hidden truths. Narratives of men who lived on the sea, fuelled by the fear and respect that fishermen and traders of the past nurtured towards the sea, which gave life and sustenance, but which often washed them away inexorably! Stories that speak of heroes, fairies, monsters, gods.

Cradle of many civilizations, Sicily contains inestimable treasures. In the largest island in the Mediterranean there are many places where legends hover between  history and wonder. The Aeolian Islands, in particular, are a real spectacle of nature. An enchanted archipelago where, especially in those places not besieged by mass tourism, time seems to have stopped and the wild nature has not been overwhelmed by man yet, but rather preserves its uncontaminated environment.

They are also called the Lipari islands and are located in the southern Tyrrhenian Sea, north of the Sicilian coast, with the two active volcanoes of Stromboli and Vulcano. Seven splendid islands of which Lipari is the largest, followed by Vulcano,Stromboli, Salina, Filicudi, Alicudi and finally Panarea, the smallest. These islands represent not only a wonder of creation but are the meeting of the four elements of nature: earth, water, fire, air. Above all here, legends, myths and stories find fertile ground, generating fantastic stories that explain the origin and formation of these wild lands, which welcome numerous visitors every year. Heavenly places, where you can breathe tradition, culture and pure air.

The Aeolian Islands are an example of the magic and charm of mythology. Just think of the name: they are the islands of the wind god Aeolus, who was given by Zeus the task of controlling the winds. It is Homer’s Odyssey that tells us that the islands are the home of the god of the winds, who lived in the island of Lipari and from there he controlled and freed them, thus causing, according to a myth, the detachment of Sicily from the continent, or enclosed them and kept them inside the dark caves of the island.

Aeolus lived with his 12 children (six males and six females, married together) in this archipelago. After having welcomed Ulysses, he gave him as a gift the winds in a wineskin as a gift, so that he could use them in order to safely return to his Ithaca. But his companions recklessly opened the wineskin, thinking it held a treasure, thus causing a furious storm that made their ship return to the Aeolian Islands: Aeolus, believing that Ulysses was being punished by the other gods, refused to help him again and drove him away from the islands.

Among the multitude of legends, there is one that tells the origin of Vulcano. Hephaestus, the god of fire, was hurled to Sicily by his mother Hera for his ugliness. The god placed his forge in the heart of the island of Vulcano, from where he forged the armour of Achilles and even the thunderbolts of Zeus.

Actually, the Aeolian Islands were born in later stages as submarine volcanoes, almost two million years ago, but have been inhabited since the end of the fifth millennium BC. by populations from Sicily who settled in Lipari, Salina and Filicudi to exploit the economic resource of obsidian, erupted from the Peeled mountain, on the north-eastern coast of Lipari. Obsidian, a sort of black and brilliant natural glass, strange as it may seem, has the same chemical composition as white pumice, from which it differs only in the glassy rather than spongy state, generated by the sudden decrease in the temperature of the lava flowing in the last phase of eruptions.

The Aeolian Islands, that fabulous archipelago that Stromboli lights up like a lighthouse. (Alexandre Dumas)