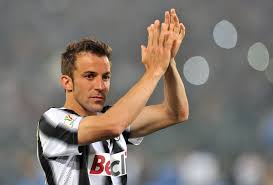 MY IMAGINARY INTERVIEW WITH MY SPORT HERO, ALESSANDRO DEL PIERO.

Salvatore: hi Alessandro, how are you? We have been very worried about your health because you were to the hospital for renal colic some days ago , in Los Angeles.

A:: I’m fine, thank you. In America there isn’t any Uliveto water!

S.: ah ah ah!  Good! How did you do this famous spot Uliveto water , Alessandro?

A. This adventure started many years ago, because I’ve  always drunk water , I like drinking water, I soon accepted this invitation to do the spot and it is very funny to act on TV.

S. We all know  you are a former Italian footballer, with a forward role, world champion with the Italian national team in 2006. Have you got a nickname?

A.: yes, it’s  Pinturicchio, a nickname that Gianni Agnelli gave me.

S.: your career started at an early age , when you were  noted from an early age as one of the greatest talents of your  generation, and you are considered among the best players in the history of Italian football.

A. thank you . I was captain of Juventus from 2001 to 2012, with the Turin club I won numerous trophies at national and international level, scoring in all the competitions in which I participated and establishing the absolute record of goals (290) and appearances (705).

S. Can you tell us about your career in the national team?

A.:  From 1995 to 2008 I was part of the national team, participating in three world championships (France 1998, South Korea-Japan 2002 and Germany 2006) and four European championships (England 1996, Belgium-Netherlands 2000, Portugal 2004 and Austria -Switzerland 2008), the last of which as captain. I still scored 91 appearances and 27 goals in the blue, making me the fourth best scorer ever together with Roberto Baggio.

s.: have you ever won the Golden foot?

S.; Alessandro, thank you for this short interview, would you like some water?