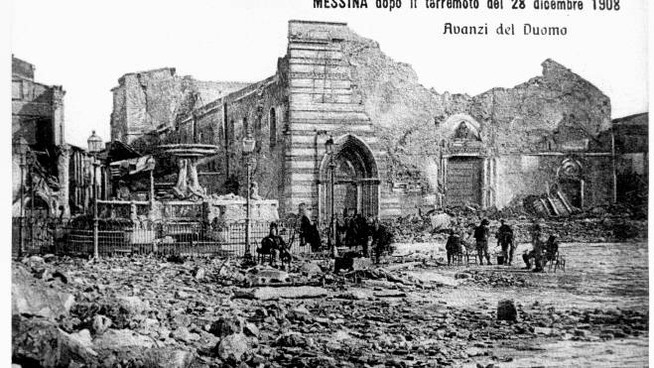 112 years have passed since that terrible night, but that of 1908 still remains the largest natural catastrophe in all Europe in terms of the number of victims: an earthquake equal to the 10th degree on the Mercalli scale which caused from 90,000 to 120,000 deaths.

Every year, on the day of this dramatic event, there are many initiatives to remember it, in this way even the new generations have the opportunity to know more and more details of that tragic moment. During that night 112 years ago, at 05.20 the seismographs of many nations began to mark on the printouts of all the seismic observers that, in an area not yet identified in Italy, a very important seismic event was taking place that would surely have left behind extensive damage. The earthquake affected Calabria and Sicily but the consequent tsunami that occurred mainly devastated our city of Messina because it caused the collapse of 90% of the buildings present.

The first ships that came to the rescue were the Russian and British ones, anticipating the Italian ones that came to help only when the Government of the time was made aware of the real catastrophic conditions: at the beginning, in fact, the situation was underestimated, indicating it as a simple seismic event.

The testimonies collected over these long years have given a picture of this that happened that night that makes you shiver: people who slept peacefully, suddenly found themselves submerged in rubble, half-dressed in the remains of what were once buildings, dust everywhere, immense chasm, rain that came down copiously and made everything more dismal, dark, continuous explosions, fires, deaths…. so many dead!

To these damages caused by the earthquake, were added those caused by a violent tsunami which, with devastating waves, caused further victims among those who, having saved themselves from the earthquake, had massed on the shore to seek shelter: the violence of the waves destroyed the houses built near to the beach and took boats with him, wounded and dead. The aftershocks lasted until the end of March.

In Messina there were many buildings that collapsed, totally or partially, under the fury of this catastrophic natural event:

– La Palazzata, a long series of buildings, including the Town Hall, overlooking the harbor.

– The church of S.S. Annunziata and many other churches.

– The Cathedral, which was later rebuilt respecting the original architecture.

This disaster caused the loss of a good part of the historical memory of the city of Messina. The whole of Italy mobilized to bring aid through collections of money, clothes, food, with the organization of voluntary groups of engineers, doctors, workers, priests. As I said, 112 years have passed but in the mind of the Messina is well pressed that moment, obviously thanks to the memories handed down through the stories and testimonies of the time and, precisely to give the importance it deserves to this tragic event which, unfortunately, is part of our history, every year on December 28 events are organized to pay homage to the victims of that apocalypse that changed the history of Messina.