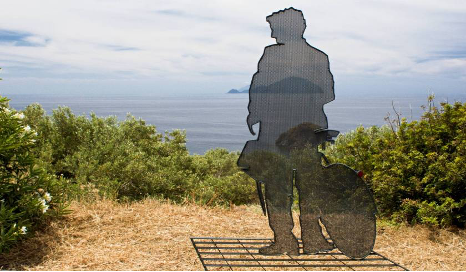 “Il postino”, “The Postman”, is one of the iconic films shot in Sicilian landscapes and whose main character is played by Massimo Troisi, an Italian cinema star who became legend. What is even more shocking is that this film was his last masterpiece since he was severely ill during the filming and he passed away only a few hours after the end of the shot.It is inspired by the novel “Il Postino di Neruda” written by the brilliant Chilean’s writer Antonio Skàrmeta who was awarded in Italy, France and Spain for his work.

The film, set in 1952, deals with the period that goes from Neruda’s exile to his departure, and takes entirely place on a small island in Italy, inhabited by common illiterate fishermen only interested in their trade. The story adapts Skármeta’s novel, with some changes in the plot.

After reading Antonio Skármeta’s novel, Troisi decides to turn this original and poetic modern tale into a nowadays world representation, adding a touch of his typical melancholy which won him the title of “the comedian of feelings”. Indeed, in this film, he lives up to his nickname.

Furthermore, Troisi manages to give voice and soul to the postman Mario, a shy and awkward person, who gradually becomes capable of creating metaphors, a word of which he previously ignored the meaning and even scared him, and even able to give advice Neruda.

The beauty of this film was rewarded with 5 nominations for the 1996 Oscars, one for Best Picture, Best Actor (Massimo Troisi), Best Director (Michael Radford), Best Non-Original Screenplay and Best Dramatic Score.

This film is an unquestionable success even if it presents some differences from the original novel that the director had to adapt to make it more understandable for his audience. For instance, Mario’s surname has been adapted to Ruoppolo while in the original novel it is the Spanish surname Jiménez.

The film was a critical success. Even actors such as Sean Connery and Roberto Benigni regarded the film as one of the best of its genre, both Italian and European.

“It was love at first sight. We were always together. Seeing him in the Postman I cried. It was like a flight without wings, his thin body floated above the screen, magically “

«Massimo had his soul on his face. The film Capitan Fracassa (another film with Massimo Troisi) introduced me to Massimo, I saw him and immediately liked him. Then Il Postino arrived, giving me the opportunity to work with him, in a unique experience. I think that in all the history of cinema, there is no such film. The memories I have of Massimo on the set are happy memories, the air one breathed, considering the difficulty that Massimo had in filming, given his illness, it was still a relaxed and never sad atmosphere. One thing that made me smile was his way of speaking, I recited in French, he neither in Italian nor in Neapolitan; he acted as only he knew how to do. Our day on the set was organized in such a way as to make Massimo’s work less tiring, in the morning we would shoot for a few hours to keep him from getting tired “

In conclusion it’s important say that “Il Postino” was a revolutionary movie which has left to the audience a unique idea of friendship and has let see how a person can change everything for the better.

Re-writing the plot, Radford gave to it something that only an Italian heritage owns and Troisi is the herald of the Italian tradition, no one but him could have performed he can Mario Ruoppolo better.

Thanks to this film the little island of Sicily is famous all over the world and is full of memorials for Mario Ruoppolo and Massimo Troisi that tourists love to take pictures of. They have gone down to history.