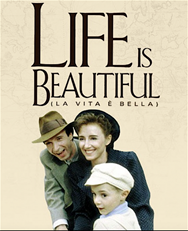 Guido Orefice is an Italian man of Jewish origin who moves to his uncle in Arezzo.  On the way he meets a young woman named Dora, whom he immediately gives the nickname of princess, and falls in love with her.  Arriving in the city, Guido starts working as a waiter and one day he quarrels with Rodolfo, an arrogant fascist bureaucrat.

Days after Guido, he meets Dora again and discovers that she is engaged to Rodolfo.

During one evening, the two boyfriends were together, Guido follows the young woman and, with a stratagem, they take a walk together, at the end of that evening Guido confesses his love for her, evenings later she reciprocates his love.

We are in the midst of World War II, in the period of persecution against the Jews.  Despite this, the family seems to have a happy time: Guido has managed to open a bookshop, while Dora continues to work in the school.  This period is abruptly interrupted when Guido, his son, and his uncle Eliseo are captured by the Nazis and loaded onto a train together with other Jews for deportation to a concentration camp.  Dora, having arrived home and having found the signs of the passage of the Nazi-Fascist troops, arrives in time at the station to ask the soldiers to get on the train too, even though she is not Jewish.  Guido in order to protect Giosuè from the horrors of reality, from the beginning of the journey he tells Giosuè that they are participating in a game, in which they will have to face numerous tests to win a real tank.

One night, with the end of the war and the Nazi occupation, German soldiers begin to leave the camp.  Guido, after hiding Giosuè in a locker, telling him to play hide and seek, sets out in search of Dora disguised as a woman, but is discovered by the SS and shot by a soldier.  After the evacuation of the camp, Joshua leaves the locker and seeing the tank entering the camp exclaims: “We have won!”  Shortly after, the child rejoins his mother and they hug again.

Poor those children burned alive or deceived, everyone has the right to live, to have a childhood and to play.  And everything has been taken from them.  Even women, their femininity was taken away from them and men were forced to work hard otherwise they were “useless” and were killed like the elderly.  Unfortunately many people today forget or say that this never existed, and such a mentality must be fought.

This is one of my favourite films, it tells a tragic part of history that in my opinion shouldn’t have even existed; human beings are all equal whatever their origin.  No one should allow themselves to belittle others or deprive them of their lives just because they are, as the Nazis say, “respectful of others”.

What can I say about this story? I think it’s brilliant to deal with such a serious issue and manage to play it down through a beautiful love story that manages to enjoy moments of healthy happiness in spite of everything. A true masterpiece.