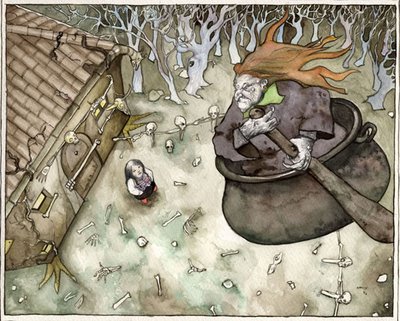 LEGENDS FROM ALL OVER THE WORLD.

Baba Yaga: the witch of the forests of Russia_Legend of the Russian mytology

Once upon a time, in the heart of cold Russia, there was a little girl named Anja. When she was still little, her mother had sewn her a fabric doll, which the child always carried with her. This doll was very special: if Anja gave her something to eat she would start talking to her! The little girl immediately fell in love with the doll, which she nicknamed Mirtina.

One bad day, however, the child’s mother died; then the father remarried, but the new wife and his two daughters turned out to be bad and selfish towards Anja (a bit like what happened to Cinderella!). The little girl found herself doing all the housework alone and there was no one to defend her, because her father was always away for work. Fortunately, she could count on the help of Mirtina, who helped her with the housework.

So the years passed and Anja became more and more beautiful, increasing the envy of the stepsisters and stepmother, who began to look for a way to get rid of her once and for all. Then the stepmother had an idea: she decided to send Anja to visit Baba Yaga who lived not far from them, with the excuse of having to ask her for a fire to light the stove.

Anja was terrified. Baba Yaga was the forest witch who ate everyone who came near her home!

She chased them with her hut on crow’s feet until she reached them; then she ate them and chopped their bones in her mortar!
Anja tried to change her stepmother’s mind, but she didn’t help.

So, the next morning, the girl walked on the path that led to the forest. Arriving in a small clearing, Anja found herself faced with her nightmare: Baba Yaga was flying on her magical mortar towards her! The girl tried to stay calm as she told the witch the reason for her visit. At the end of the explanation, she was allowed to remain in the service of the witch, at least until the latter got a little peckish …

Fortunately, every task that Baba Yaga entrusted to her, Anja was able to carry out it thanks to the help of Mirtina. Even the witch, however, had realized that there was something strange in the young woman because every time he was able to carry out all the tasks he entrusted without ever making a mistake. So one evening, Baba Yaga asked her how she did all the homework that she entrusted to her. Anja said nothing about Mirtina, but she explained to the witch that, before she died, her mother had given her the “blessing” that would always protect her. At that point the witch went into a rage: she hated the blessed! So she gave Anja his fire and then chased her out of the house.

Back home, the stepsisters asked her where she had been and scolded her for not coming back to them right away with the fire. At those words the flame began to grow and grow more and more, until it completely burned the house, the stepsisters and the stepmother! Anja wanted to tell Baba Yaga what had happened, but when she got to the place where the hut was, she saw a small house with a sweet old woman who lived there. Anja then let herself be hosted by the old woman and, with Mirtina’s help, began to weave for her the most beautiful linen ever spun. Think that only the Zar could afford such stuff! When he saw him he wanted to congratulate Anja. When the two met it was love at first sight and a few days later they got married. From that day Anja lived in the greatest splendor imaginable, but she never revealed her secret to anyone …