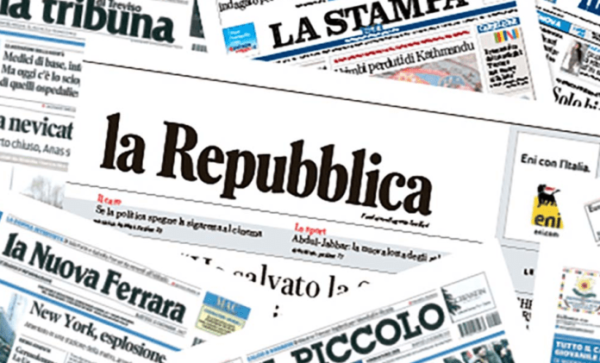 “La Repubblica”: one of the most important Italian newspapers

La Repubblica is an Italian newspaper, based in Rome, belonging to GEDI Gruppo Editoriale itself part of the Exor group.

It is the second-largest newspaper in Italy for total circulation (more digital paper) and in terms of the number of readers, after “Corriere Della Sera”.The newspaper was born from the initiative of Eugenio Scalfari, former director of the weekly L’Espresso.

La Repubblica debuts on newsstands on Wednesday, January 14, 1976. It presents itself to the public in a Berlin format, smaller than those usually adopted at the time by other national newspapers: six columns instead of the traditional nine; it consists of 20 pages and comes out from Tuesday to Sunday. Instead of the traditional third page, the culture is placed in the central paginone.

In 1981 Scalfari saw the opportunity to take his newspaper to the top and launched new initiatives to expand its area of interest; among others, he brought the foliation to 40 pages, to give more space to various news, shows, and sports. His magazine becomes an “omnibus newspaper”, that is, a newspaper for all types of readers.

As for the political line, it maintains a line close to the political alignment of the center-left, although it does not spare criticism of its political representatives and the parties that compose it (with regard to both the “moral question” and the fragmentation of political forces).

1996 is an election year. On April 5, the experimental version of the newspaper on the web is opened, on the occasion of the political consultations on April 21. In August work begins on the realization of the final online edition.

On January 14, 1997, the newspaper’s website (repubblica.it) was launched, which will establish itself as the main Italian information site with over 10 million and 600 000 unique users: currently, the site contains all the articles since 1984. Also in 1997 the local print edition of Palermo was born, followed, three years later, by that of Bari.

In 2004, through a gradual process, the newspaper inserts color into each of its pages.

The Sunday edition is enriched by a large cultural section (La Domenica di Repubblica). In September 2005 the monthly supplement XL was launched (dedicated to young audiences); in December 2006 Velvet was born (addressed to those who follow fashion).

On September 19, 2007, the newspaper was deeply renewed, in graphics and layout. In fact, Repubblica splits into two newspapers: one dedicated to news and another (called R2) containing insights, surveys, and reports on the main current issues.

Unlike the adventure of Montanelli with “Il Corriere Della Sera”, the story of “la Repubblica” is instead from the beginning that of a national newspaper.

The nation and the Republic that Scalfari and his collaborators have in mind are a country that must free itself from the opposition of the two political churches, Christian Democrat and Communist, they no longer wanted a divided Italy, but united.

So we can see the improvement over the years: nowadays it not only deals with political topics as before but currently “La Repubblica “is the 24-hour online newspaper on politics, news, economics, sports, foreign affairs, fashion, TV series, food, motors, technology, travel, etc. So he takes up all the fields so that he manages to expand his audience, in fact, he hit me a lot.

Since it also deals with my passion for “dance” for this reason I decided to deal with this newspaper. An article that particularly strucks me is “Danza che ti passa” by Paola Emilia Cicero, who says: « The “ballet” makes me live longer and is also suitable for the most mature ladies ». The article is placed in the “Republic of Women” part. I extremely share the idea that dance is an effective tool to keep us healthy and fit, but it is also fun and everybody can do it at all ages. The article reports research done by a group of Brazilian researchers from the University of Porto Alegre who took stock of studies on the subject: from the figure it emerges that in mature age any type of dance has beneficial functional effects regarding posture, balance, flexibility, and cardiorespiratory activity and keep the joints healthy. I’m very impressed with what Elena  Quintana says: «But above all it allows us to realize a dream, to understand that life is not over and that no one can tell you that you are too old to dance ». Dance is for me an instrument that allows expressing our feelings, and every person must feel free to do so.