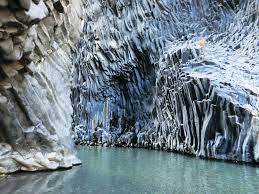 A journey along the Alcantara River

The Alcantara River derives from the Arabic Al Quantarah meaning “the bridge.” It is one of the most important rivers in Sicily. It rises from the Nebrodi Mountains at an altitude of 1250 m near Floresta, and flows for about 50 km before flowing out near Capo Schisò.

In 2001, The Alcantara River Park was established, which extends between the provinces of Catania and Messina

Calatabiano, whose name derives from the Arabic Qalat-Bian, meaning Biano Castle, is famous for its medieval castle and St. Mark’s Castle.

Gaggi, derives its name from the Arabic Karigi meaning water canal. The center is developed near the lower valley of the Alcantara River, in the vicinity of Mount La Guardia.

Graniti, a center of Arab origin is located on the right bank of the Petrolo stream. Known for its pine forest, it has always been famous for its rich production of cherries.

Motta Camastra is home to the famous “Alcantara Gorges,” a site known worldwide for the spectacular basaltic prisms. The interference between the incandescent lavas and the slow cooling along the course of the Alcantara have made the river a destination of great interest from a tourist as well as scientific point of view.

Further on, between the valleys of the Alcantara and the Zavianni River, we find Francavilla di Sicilia, where the Convent of the Capuchin Friars Minor is located, which houses the Museum of Franciscan Witness and a herbarium consisting of medicinal plants typical of the ecosystem of the area. Near the Convent a bloody battle between the Spanish and Austrians took place in 1719, documented by prints and a meticulous description of the event.

In Castiglione di Sicilia are the Lauria Castle, the Mother Church and the church of S.Domenica (called Cuba) a rare and valuable example of a domed Byzantine construction.

Mojo Alcantara is developed on an alluvial plain near Mount Moio, one of the minor craters connected to Etna. Precisely to the pyroclastic cone of Mount Mojo was originally attributed the eruptive event from which sprang the lavas that affect the bed of the Alcantara River.

Malvagna offers the opportunity to admire the remains of the 17th-century convent of the Friars Minor and the Byzantine three-colored cell church dating from the 6th-7th centuries called “Cuba.”

Ancient Auricella, today Roccella Valdemone is located at the foot of the tip of Castelluzzo. Of strategic importance since the Norman period.

The last town in the river park is Randazzo, a town that is home to three parks (Alcantara, Etna and Nebrodi) with a rich historical-architectural testimony.