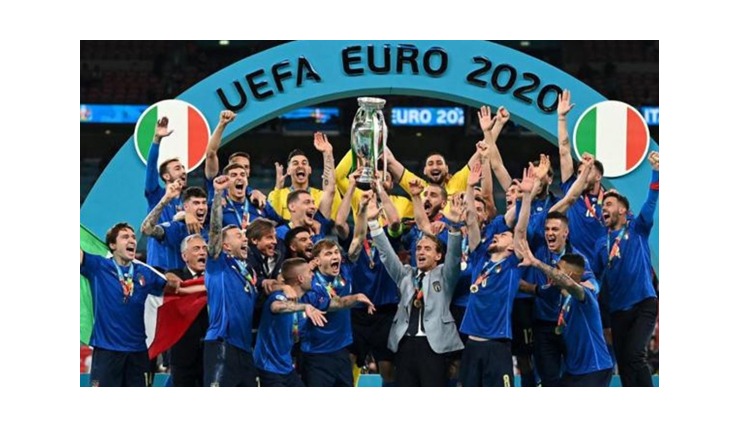 Italy wins the European Football Cup after the one in 1968.

A crazy victory, after the failure to qualify for the World Cup, as if to say from the lowest point, to the triumph at Wembley.

England bends, after Spain and Belgium, to this tenacious Italy.

Yet Italy had a terrible start, with Shaw’s goal in the first match.

Then the ascent. Hero of the match Donnarumma, who saved two penalties. England, which has never won against Italy in a major international competition this time even lost at home, but the game started very badly with the goal of Shaw in the first minute.

The Azzurri suffer a lot in the first half. Italy, after the blow, tries to react with the heart, the pressure, the dribble. England, however, defends itself well, raises a wall. Only Chiesa manages to break through with a personal initiative in the 35th minute ended with a powerful left that comes out a little. It would have been a crazy goal.

In the second half, Italy restarts with a couple of shots from Insigne. At 54 ‘Mancini changes the team by inserting Cristante and Berardi for Barella and Immobile. At 63 ‘another great play by Chiesa, as in the first half, but Pickford stretches out and deflects it with a great intervention. England with defensive tactics in the 67th minute takes the goal.

Cristante touches it on a corner kick, Chiellini is dragged down, Verratti head hits the post, but in the end, in the total chaos, Bonucci’s shot arrives and scores. Italy raises its head and frightens the British, who retreat and build barricades.

At 82 ‘, Chiesa comes out, the best, who injures his ankle: Bernardeschi replaces him.

We go to extra time. Mancini restarts with Belotti for Insigne.

At 96 ′ Sterling pin counterattack approaches the goal but Chiellini is providential in a slip. Mancini lets in Locatelli in place of Verratti, Southgate inserts Grealish on the left and moves Sterling to the right. Italy is now moving back dangerously.

At the start of the second half Bernardeschi on a free kick approaches the goal, Pickford neutralizes it in two halves.

Then England raises the center of gravity, pushed by their fans, and Italy suffers tired by now, closed behind.

At 114 ′ Jorginho risks big for a hammer-footed intervention on Grealish. Kuipers brings out the yellow.

At 118 ′ enters Florenzi in place of Emerson. Southgate realizes it’s over and puts in penalty takers Rashford and Sancho.

On penalties Italy made the first mistake from the spot, as had happened with Spain, this time with Belotti. In the end, however, he wins. Just the two penalty takers Rashford and Sancho betray Southgate. Jorginho who had the decisive penalty between his feet, as in the semifinal, this time wrong due to fatigue: the shot deflected by Pickford hit the post. In the end Donnarumma takes care of it, neutralizing the penalties, the last of Saka. Rightly to him the award as the best player in the European Championships. At Wembley he ends up with Italy as champions.