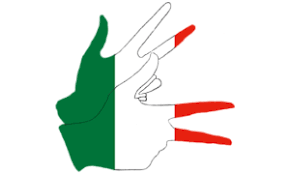 Sign language is a language system used by deaf people with whom they can communicate.

Unlike I thought, there is no universal sign language. In each country we find communities of deaf people who use signs to communicate and who use different varieties of languages: American Sign Language (ASL), Langue des Signes Français (LSF), British Sign Language (BSL), Italian Sign Language (LIS), and many others.

The LIS is a true language based on a precise grammar composed of signs. In spoken languages we have words composed of letters that correspond to sounds, while in languages that are not spoken, all signs are marked by a series of manual elements that indicate their precise meaning and that together with posture, facial expressions and lip movement, distinguish one sign from another. These elements (called parameters) are 5, also counting facial expressions.

Unfortunately, in Italy, the LIS has not been recognized in all respects as a language and therefore a unique and equal dictionary has not been made throughout the country, therefore a specific sign can also change from city to city. Precisely for this reason, it is important to learn above all the sign language alphabet, based on the shape of the hands and their movement.

This helps us, for example, to indicate your first or last name (try to form your own), but also cities, States or places. This is called typing, that is a name called letter by letter. Despite this, the various names can also be represented by a “sign name“, that is a sign that the marking community associates with a name, also based on its characteristic, to facilitate everything. If you have a fairly long name, you can also associate yourself with a sign that represents your particular feature, or you can simply take the initial of your name.

A hand is used in sign language. There is no specific hand to communicate with, but you use your dominant hand, right or left, just choose one.

As mentioned before, in sign language, facial expression is as important as the tone of the voice in a spoken sentence, because that is exactly what already marks half the meaning. For example, when we ask a question, we use a sharper tone of voice, but in sign language everything lies in the movement of facial muscles, especially eyebrows and lips.

Despite being a language generally for deaf people, anyone can learn this little-known, but gorgeous language. In addition, there are videos and a site dedicated to LIS, called spreadthesign, which you can use to learn sign language.