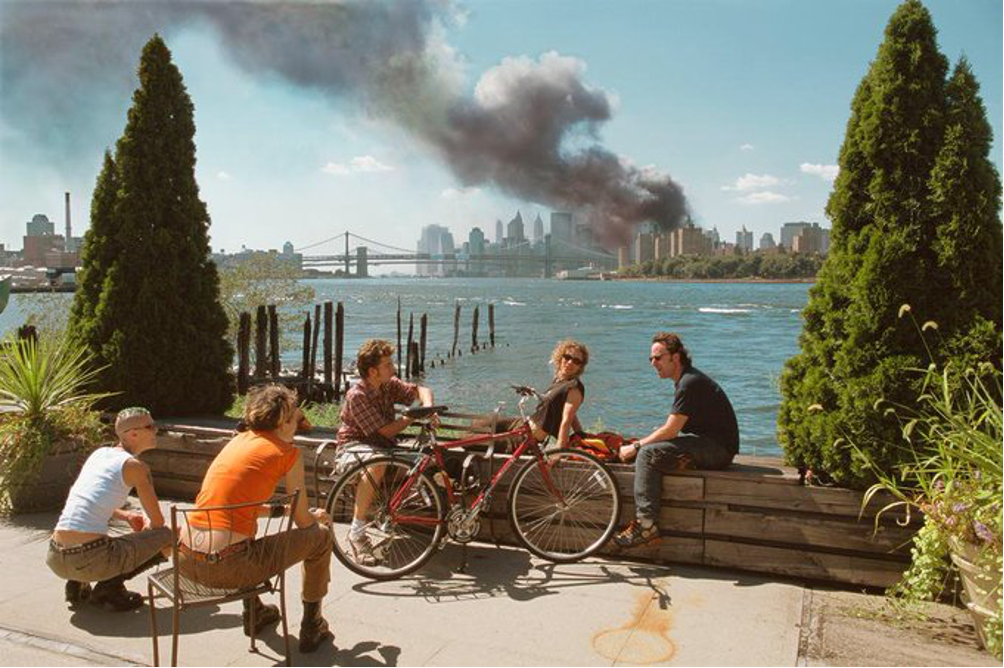 “Quiet state of mind that, in front of an object, feels neither desire nor repulsion for it; or that, faced with the need for a voluntary decision, no longer leans towards one rather than the other term of an alternative. In common use, often with a tone of blame, the condition and behavior of those who, under certain circumstances or out of habit, do not show interest, sympathy, emotional participation, disturbance. “

Let’s start by saying that it is a feeling that very often pervades the human being and leads him, indirectly, to carry out wrong actions that involve him completely.

This image shows us an example of indifference:

It is an image that portrays people, calm, amused, intent on chatting, indifferent to what develops behind them. Not because they didn’t notice but because they didn’t want to see. That scene was the fall of the twin towers on 11 September 2001, one of the most tragic moments in history. But I am not here to blame those who have not seen what was behind them, because thinking about it, they could only have taken pictures, filmed videos, both for the distance and for the lack of interest in carrying out a “rescue” movement.

Another episode, you will say taken for granted, is that of the concentration camps, small circles of hell around the world that received many people and made them work as slaves and then kill them mercilessly. I do not blame certain sadistic soldiers who took pleasure in wiping out a human life that was not like them and therefore, as different, useless; but those who are there for fear of being killed, arrested or worse, disowned by their nation; those people who stood there watching and closed the windows. A man who did not remain indifferent in this episode was Giorgio Perlasca, a man who pretended to be Spanish consul, drew up the appointment of diplomat on his own and with stamp and paper in hand he saved a myriad of Jews and innocent people. Yes, he took a risk, yes he was afraid, but he did not stand still, he did not hesitate and fought for his ideals.

If we want to look for another example of indifference, we can find an ocean of moments that involved man. Another heartbreaking moment is that of Alan Kundi, a Syrian child, only 3 years old who, together with his mother and brother, tried to cling to the rubber dinghy to reach a better place than the one he had escaped from. Her dead body on a beach in Turkey has moved many journalists, activists who have commented on the brutality of that moment, and how immigration is a matter of the highest indifference.

Think when a child goes to school to learn, to enrich his mind and when he returns home he decides not to go out and stay in his room crying. Why do you think? What happened to a child for not wanting to go to school anymore? Maybe someone who treated him badly, maybe someone who didn’t help him, maybe someone who didn’t have the courage to say ENOUGH and avoid physical and mental damage to a poor bullied child. Or when a girl in a disco is drugged and raped by grown men, kids who want to have fun, and is not helped out of fear, interest, curiosity or maybe it’s just apathy, numbness.

When a guy beats his girlfriend because she was wearing a skirt or lipstick, and there are those who look and more than intervene, what does he do? Watch, film, and giggle like it’s a circus scene.

Indifference is an ugly beast, an evil that lies within each of us and we must choose which side to be on ourselves.