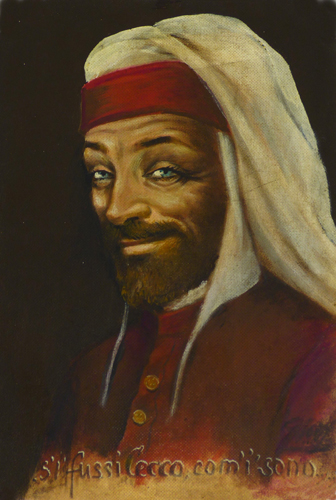 Cecco Angiolieri was an Italian poet from the city of Siena in Tuscany. He belonged to a rich family and he lived between 1260 and 1313.

He led a troubled life, he was a lover of women, food, drink and gambling, he was often involved in fights and trials and he died in misery after squandering his parents’ inheritance.

He wrote many poems collected in the “Canzoniere” that deals with three main themes: the passion for Becchina (the woman he loves), the hatred for his father and money as the only value that can make his life carefree and fun.

He wrote his sonnets in a colloquial language, rich in colorful popular expressions.

The best known sonnet is “S’ì fosse foco” (“If I were fire, I’d torch the whole world”): a list of negative wishes through which the poet underlines his anger towards the world and his parents.

It is the fantastic description of a pipe dream.

Only at the end he expresses a positive and achievable desire that highlights his passion for beautiful women.

Following the outline of Cecco’s sonnet, I tried to write a sonnet by myself in which I do not express anger but the desire to change the world.

“If I were a pencil, I would redraw the world,

if I were life I would resurrect the dead,

if I were love, I would erase hate,

pushing me even into the deepest abyss.

If I were light, I would light up everything in a second,

if I were the wind I would sweep away the wickedness,

if I were lucky I would all kiss

and I would do it in a joyful way.

If I were a pen, I would rewrite my life,

I would paint it with many colors

and I would make it less flattened.

If I were a perfume, I would spread my smells,

on the meadows and mountains I would breathe the clean air

and I would fill our hearts with love”.