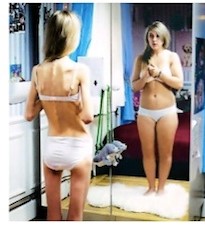 Today our eating habits are often influenced by social and cultural patterns, in particular young people try to imitate supermodels. Adolescence is a delicate phase, it’s a period of transition and change. Teenagers go through a moment in which body and mind move from a condition of childhood to that of young adulthood. Puberty gives a change to the body and the search for approval among peers and beyond, leads to the development of obsessive attention to one’s body and physical appearance.

Anorexia is a rather widespread phenomenon especially among young women and it’s considered one of the most serious eating disorders.  People suffering from anorexia see themselves fat, they are terrified of gaining weight, so they produce vomiting themselves. The anorexic person recognizes that he\she is thin but he\she  still feels fat.  The main characteristic is the restriction of food and a refusal to maintain a normal weight associated with a persistent lack of appetite that leads to an extreme body emaciation, after there is weight loss and in the girls the absence of menstruation.

When a son or a daughter in a family suffers from an eating disorder, parents ask themselves many questions about  what  they did wrong , what they can do to help their children, what attitude should be taken, if it’s better to be understanding and available or uncompromising.  What’s the best care and how to behave when their children  are sick. Guilt is one of the most important aspects that emerges when in a family a child starts having problems like these, parents often think that is their fault.

From a psychological, emotional and physical point of view, the anorexic person needs help, affection and  attention,  so the role of the family is essential to the prevention and treatment of this type of disorder. But it is also very important to dialogue and listen to the issues of the subject, since such disorders arise in a difficult period of change in which the subject no longer knows who he is.

If anorexia today is a widespread disease,much depends on social media that instils in young people the idea that being thin means being beautiful.

Instagram gives teenagers the virtual tools to compare their own image with that of others, not only through photos, but also through the opinions expressed in the comments of the users themselves. All this, although it may seem an effective way to communicate, can  be particularly dangerous in some cases.

Influencers propose beauty standards that are sometimes difficult to achieve. They show their profile as in a showcase where everything is built on the pursuit of perfection. This causes young people who are already not particularly satisfied with their body, a lowering of their self-esteem, a discomfort that leads them to a devaluation of themselves.

To prevent eating disorders, it is essential to have a dialogue with your family.

Parents have to encourage children to question what they have seen or heard.  Talking with children about the fact that each person is different from the other and can have forms that are personal.They have to promote self-esteem, respect the results obtained by the children and support them in achieving their goals, listen to them without criticizing inappropriately; look for positive qualities in them, such as curiosity, generosity and a sense of humor. Make children understand that parental love is not based on weight or physical appearance. Talk about the dangers of dieting and emotional eating.