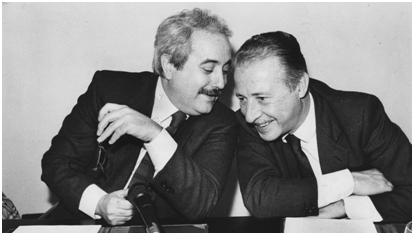 Paolo Borsellino and Giovanni Falcone were two magistrates, two men who discovered the secrets of this organization in the eighties when nothing was known about the mafia.  Falcone, thanks to the interpretation of the signs, gestures, messages and silences of the Cosa Nostra men, was able to decipher their “language”, their way of acting. A job done above all thanks to the relationship with the repentant, men who choose to leave the mafia to collaborate with justice.  Thanks to one of them, Tommaso Buscetta, they began to know the secret code of the mafia: for the magistrates it was like a language teacher who allows you to go to the Turks without speaking with gestures.

They didn’t like feeling like heroes.  They too, like us, were afraid of the “bad guys”, of those who do not respect any rules in order to mind their own business but have never given up.  And above all they have shown that working together can be a winning weapon. In those years, in fact, with another senior magistrate their head, Antonino Caponnetto, they founded a “pool” against the mafia thanks to which they managed to capture hundreds of mafiosi convicted in the now famous maxi trial concluded on January 30, 1992. But the mafia does not forget. Indeed from that moment he prepared his revenge: to kill Falcone and Borsellino.

It founded the so-called “anti-mafia pool”, a team of prosecutors against organized crime, consisting of Falcone, Borsellino and Lello and Guarnotta judges.The pool also arises from the need to unite the institution made up of judges who fight against the mafia, but do it individually; in the pool we act together.  On 29 July 1983 Chinnici is killed with his escort, and Antonino Caponnetto replaces him.  All members of the pool insist that the state intervene and offer its support, but this does not happen. The arrest of Tommaso Buscetta gives an epochal turning point to the fight against the mafia, because he decides to become a collaborator of justice and describes in detail the structure of the mafia.The interrogation of him begins in Rome in July 1984 and helps a lot in the investigation against the Cosa Nostra.

The investigations initiated by Chinnici lead to be the first major trial against the Mafia. The reaction of the Cosa Nostra in the summer of 1985 to kill Giuseppe Montana and Ninni Cassarà, close associates of Falcone and Borsellino, to the point that it begins to fear for them, which are sent to stay for some time with families at the Asinara prison to end the practices of the Maxi Trial, which will lead to the arrest of 475 defendants.

On 21 June 1989 the mafia tries to kill Falcone by placing a bag with TNT in the middle of the Addaura rocks, a few meters from the villa rented by the judge.

The attack was thwarted, but later many direct witnesses to the facts died in suspicious circumstances.  Among these, also the mafioso Luigi Ilardo, informer of the colonel of the carabinieri who is confident that he knows that: in Palermo there was an agent who did strange things and was always in strange places.  He had the face of a monster.  We learned that he was also near Villagrazia when the policeman Agostino was killed.

Ilardo was murdered on May 10, 1996, a few days before his confessions were recorded.  A week after the attack, the Board of Governors decided to appoint Falcone as an assistant prosecutor at the Palermo Public Prosecutor’s Office. From 1991 until his death, Falcone was increasingly active with investigations, but was not supported by the political world.  Meanwhile in Rome the superpower of attorney is finally established.  Both Borsellino and Falcone realize that the superpower of attorney could be very dangerous for their safety. In May 1992 Falcone reaches the numbers needed to win the election superpower of attorney.  But May 23, 1992 as he returns from Rome to Palermo, where he expects Borsellino to celebrate her new role as a superpower of attorney, he is killed by a Mafia bomb. Some of TNT charges are placed on the highway, and Giovanni Brusca by operating a remote control triggers the explosion. On 19 July 1992, after having lunch in Villagrazia with his wife Agnese and their children, the judge and his escort go to via D’Amelio, where his mother lives; 100kg of explosives are placed in a car that kills Borsellino and five escort officers in the explosion.  Just the day before, he had been told that he would be the new Super Attorney.