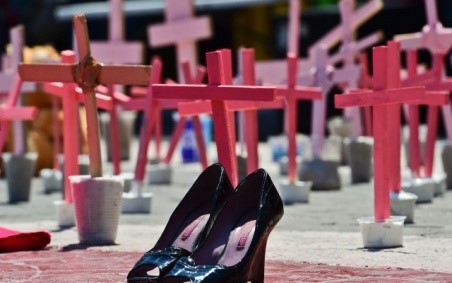 WHAT DO WE MEAN BY THE WORD FEMICIDE?

The term femicide refers to a particular type of murder whose victim is a woman. Femicide is considered one of the most hidden phenomena, in which man has full control over a woman. Violence can be described as the culmination of anger not immediately exploded, but directed to weaker ones in many forms.

In the past, men were allowed to address women in violent, aggressive and humiliating tones, in private life. Just take into account what used to happen in my homeland, Sicily. In Italy in fact, a few years ago, the man who killed his wife or girlfriend “out of jealousy” could count on a legal mitigating factor: the “honor” motive. Thanks to this, the man could be sentenced to a few years in prison. In my country, this problem has been underestimated for long; women have been considered inferior to men, and subject to him (the husband/father etc) for economic income and social autonomy.

CAN THIS TERRIBLE AND SPREADING PHENOMENON EMBEDDED IN OUR CULTURE BE PUT TO AN END?

Above all, greater family and school education is needed, a better sense for kindness should be instilled in order to make violence illegitimate. It should be clear that fierceness, is nothing but a consequence of prejudices due to a wrong interpretation of virility, honor and of the male-and-female role in a couple or in society; “love” does not mean possession of a woman, she shouldn’t be asked for absolute obedience, denying herself freedom and feelings. It is essential that wives, girlfriends and fiancées do not underestimate any signs of violence, they must be ready to and not afraid of denouncing, even when this may be risky.

Therefore, it is necessary to modify a cultural phenomenon of disrespect of female bodies, imposition of moral and social inferiority. These cultural limits, social stereotypes, absurdities should not be tolerated any longer. It is time to let us women take a step forwards and fight for respect.

Being a woman in 2021 has its labours and responsibilities. At least once in our life we have heard phrases like “if you wear a very short skirt, then you’ll ask for it” as if it skirt inches really matter in measuring “consent”.

Women have often faced cruel and unjust society. Society, even before teaching its “sons” that consent is legally needed, it has tried to taught women to behave in ways not to unleash the masculine instinct; indeed, men should be taught that girls are not object to be owned, but human being perfectly equal to them.

Every woman is able to decide what to do with her body, which skirt or shirt to wear, what job to do. She can look for success on her own, and doesn’t need permission or obligation for motherhood and she should not be threatened to lose her job if she’s on maternity leave. Every woman should feel free to choose when and if to have a pregnancy. Every woman is born free to choose how to live her life, it is quite sad we still have to fight for this in 2021.

THE TRAGEDY OF FEMICIDE

Despite the cry for help from lots of women or the celebration on 8 March and on other occasions, our society is light years away from showing respect to women. In my country, in Italy, every 72 hours a woman dies at the hands of a “man”.

Femicide does not have age limits, degrees of kinship, it is often justified as an excess of love, but love should not make you die, it should make you live better! This article is dedicated to a young girl from Palermo who lost her life at the hands of her boyfriend, Roberta Siragusa.

She was a young girl with lots of dreams and goals. Other young people will go on trying to achieve their goals, but Roberta will be 17 years old forever. She won’t be able to reach her dreams because they have been destroyed together with her little world, neither her nor all the women victims of femicide will be able to reach them.

Roberta died also because of our society which does not protect women, justifies male violence and makes women afraid to denounce. Violence is not love, it will never be: nobody should die like she did.