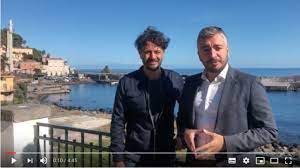 FACE TO FACE WITH THE DIRECTOR OF “THE LION ROCK”.

While waiting to see and enjoy this all-local fairytale, we propose you to savor our unprecedented interview with the director: Rosario Scandura.

As a newcomer to cinema, how was this experience with directing?
It was certainly positive and also formative, it enriched me so much both artistically and humanly.

Where did the idea come from?
The idea had always harbored within me, perhaps the key moments were three. From a child to about ten years old when I was traumatized by the “explosion of the underwater bomb”, that brutal violence of clandestine fishing that marred his beauty and creatures. As a teenager, due to the contrasts and social inequalities that still make us small in my opinion. Finally, probably marked by the first love, the one where you are a virgin in every sense and you give yourself without ifs and buts in your integrity to another person. This intertwining gave me a strong desire for rebellion that I often vented on books, writings and cinema.

What Sicily would you like to see out of your portrait?
A Sicily as simple as our characters and as bright as our landscapes, with infinite shades and inner and outer facets.

Does this really exist? Where is it? And your rock, refuge of your childhood, what was it?
The rock exists and seems almost specially sculpted, imposing it detaches only a few meters from the coast and is often still my favorite refuge. Obviously my protection and anchoring rocks are and always remain my family.

What is the scene that satisfies you the most?
Undoubtedly the ambiguous scene between the two protagonists, since we knew that at that precise moment we had to wrest smiles, disagreements and melancholy at the same moment.

And instead, if you could go back, would you change anything?
No change, there was some inexperience error but it served to restart immediately and stronger.

What emotions did you feel at the Rome Film Fest, side by side with the sacred monsters of the cinema?
Receiving the Hot Corn Green award dedicated to cinema and the environment personally gave me a new emotion and made my legs tremble, the Rome film festival was almost a tear to my sense of shyness and confidentiality. Moreover, it was really unexpected that TV and newspapers were waiting for us!

What emerges now, more desire to share or enjoy this moment of glory?
Absolutely desire to share and try to touch the most hidden heartstrings, themes such as grandparent-grandchildren complicity, the indissoluble bond of the family, respect for one’s land and for the environment, the latter increasingly painful key of ours. society.

Who do you want to thank ..
Surely my parents, my brother Luca to whom I am deeply attached and my grandparents who unfortunately are no longer there. In short, my whole family. But I would like to underline that the dedication also goes to the many Sicilians who want redemption. Both to those who remain and perhaps even more to those who have had to leave.

Is a new project already in the pipeline?
Yes, there is already something boiling in the pot. It is a difficult and delicate issue, but for the moment I cannot reveal anything!