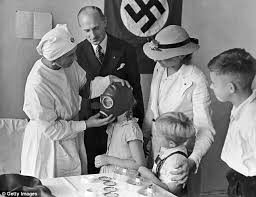 During the Second World War, in Auschwitz and in many other concentration camps, Jews were not only tortured and killed but many of them, especially children, were subjected to chemical experiments by Nazi doctors.

These experiments were almost always fatal, and the few who survived were scarred for life.

Among the first to be developed were the experiments conducted at great heights or at low temperatures. The protracted conflict with Great Britain and the air battle raised, in fact, some questions. They wanted to understand, for example, if an aviator could jump with a parachute from a height above the normal limit of breathing; how much it was possible to survive in freezing waters and how a frozen aviator could be revived.

Other experiments concerned the potability of water, in order to understand how a German aviator could survive after finishing the two liters that were supplied in the rescue kit.

Improving the Race: Studies on Twins.

One of the primary objectives of the Nazi project was to defend the “Aryan race” and promote its growth; precisely for this reason all the ways to reach this goal were thoroughly studied. The first Nazi doctors who carried out pseudoscientific research on the twins came from all over Europe to the concentration camps of Auschwitz and Birkenau. The twins were photographed, X-rayed and subjected to a long series of tests, some of which were very painful, and then their sudden death was caused by an injection of chloroform to the heart or by a blow to the head.

Their internal organs were then carefully studied. Josef Mengele, in particular, conducted completely useless experiments to find the method of influencing the color of the eyes, for example to make them blue. The only result was the blindness of the victims.

Mengele himself studied blood transfusions of different types between the twins and made experiments on the bone marrow. At the end of the war, Mengele managed to escape both the Russians and the Americans and, in 1949, he reached Argentina with false documents, thus escaping justice.

One of the main cornerstones of the Nazi ideology was the growth of the German population but, at the same time, it was considered essential to hinder the demographic increase of Jews, Slavs and Gypsies. Different types of sterilization were studied, such as the use of X-rays, since a large
number of guinea pigs were now available: the deportees to concentration camps.

Basically three types of experiments were carried out, named after the professors who followed them: Clauberg, Schumann, Madaus. 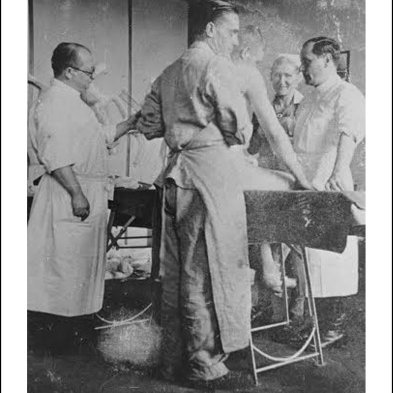 Carl Clauberg was a well-known gynecologist, who conceived a method that
consisted of introducing irritants into the cervix using a syringe, thus
obstructing the fallopian tubes. From the testimonies of some of his
patients it appears that they were subjected to prolonged and very painful
treatments, which involved up to fifty injections.

According to Horst Schumann, however, the X-ray method was the best for sterilizing a large number of people . The experiments took place first in the Auschwitz camp and later in the Ravensbrück camp, where Schumann operated on 13-14 year old gypsy girls. Schumann devised counters to hide machinery; the victims were passed in front of these counters and sprayed with x-rays. In this way, about 3000-4000 people were sterilized per day.